Some not-necessarily-original thoughts about Tuesday’s midterm elections here in the US:

–Although for a number of reasons I expected Democrats to lose control of the Senate, and lose some governors’ seats, they did rather worse than I imagined. Aside from the historic pattern of the party occupying the White House losing Congressional seats in the midterms, hats off to the Republicans: they did a good job of linking general unease (about the economy, border security and immigration, the Islamic State, Ebola, etc.) directly to President Obama and linking the president directly to Democratic candidates. Obama deserves some of the blame, often seeming disengaged and not in control of events. Here in Virginia, Democratic Senator Mark Warner– who spent much of the campaign distancing himself from Obama and emphasizing his willingness to work with Republicans– was reelected by a surprisingly narrow margin.

–Harold Meyerson did a good job of explaining why so many Americans are worried about their prospects despite the economic recovery:

Democrats who touted the nation’s economic growth did so at their own peril: When 95 percent of the income growth since the recession ended goes to the wealthiest 1 percent, as economist Emmanuel Saez has documented, voters view reports of a recovery as they would news from a distant land. Even though it was the Republicans who blocked Democrats’ efforts to raise the federal minimum wage or authorize job-generating infrastructure projects or diminish student debt, it was Democrats — the party generally perceived as controlling the government — who paid the price for that government’s failure to act.

–Lest anyone think the election results represent some kind of triumph of Republican ideology, consider this: voters in four of the most Republican states– Alaska, Arkansas, South Dakota and Nebraska– approved increases in the minimum wage. In other words, they approved significant government interference in the free market while also voting for Republicans who purport to find the very idea abhorrent and who continue to block a minimum wage increase on the federal level. In addition nearly three-quarters of Americans (including 54 percent of Republicans) believe the US economic system generally favors the wealthy instead of being fair to most Americans. That’s at odds with the line often pushed by elected Republicans: that the wealthy deserve tax breaks and special favors from government, which should stop coddling the lazy poor.

In other words, a lot of people who would never vote for someone like Democratic Senator Elizabeth Warren actually share much of her economic viewpoint– a continuing conundrum for Democrats, who need to come up with a compelling economic message. 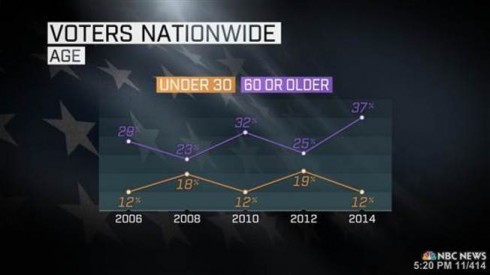 Fully 55% of young voters cast Democratic ballots for Congress compared to just 45% of older voters who did the same.

If Republicans have a “minority problem,” a “youth problem,” and an “unmarried women problem,” Democrats have a “white working class problem,” a “rural problem” and a “Southern problem.” How much of this is related to race may become clearer when Obama leaves office. And yes, I know about Tim Scott. Things may change, but as of now I suspect black candidates can only be elected to statewide office in places like South Carolina if they are willing to overlook racism on the Right and blame the problems that African-Americans face on Democrats and liberals.