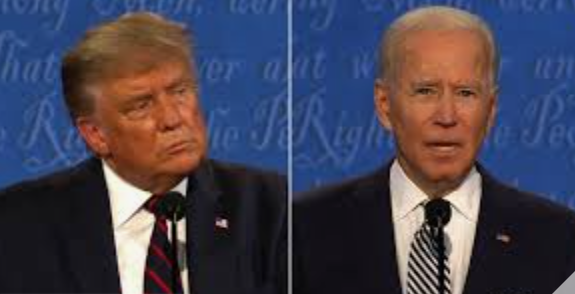 As a Canadian, I have no direct stake in American elections, even though our country is affected by every burp and fart coming from South of the Border. In last night’s presidential debate, there were too many burps and farts to count.

Before the summer of George Floyd, I had decided that, much as I support many of President Trump’s policies, I hoped that Joe Biden would win the election, for one reason only: Trump’s degradation of political discourse in his country, and, by extension throughout the democratic world. That degradation was in full view on Tuesday night. President Trump revealed, yet again, that he has no respect for debate moderation, for the rules of debate, or for the dignity of his office. It was a pathetic display of narcissism, petulance, and immaturity, which, in the words of one debate analyst, forced his opponent “into the pigsty with him.” I would urge debate organizers to change their procedures and rules to avoid this sort of demeaning nonsense in the future.

That being said, on the important policy issues, I found Trump’s direction, if not his specific comments, generally more appealing than Biden’s. Although Biden weakly protested that he would prosecute violent protesters, Trump was correct in calling out the Democratic party for its silence all summer while rioting raged in many American cities. Biden was unable to distance himself from economically ruinous “Green Plans,” smaller versions of which have been tried in countries such as Germany, and failed miserably. Biden’s response to a rather biased question from moderator Chris Wallace about “sensitivity training” was pablum, whereas Trump’s refusal to allow such divisive and America-denigrating training rang true to anyone concerned about cancel culture and the current faddish trend that accepts false ideas like white privilege, white supremacy and systemic racism as unarguable truths.

Biden was unable to convincingly argue against Trump’s contention that the U.S. economy was stronger than it had ever been before COVID-19. Trump, meanwhile, disingenuously argued that COVID would have been much worse under Biden, a difficult claim to make when the U.S. became world leader in COVID infections and deaths under the Trump administration (even if many of the early deaths in hotspots like New York could be attributed to the actions of Democratic governors). Neither Trump nor Biden were persuasive regarding future courses of action in dealing with the pandemic; but Trump at least noted that the economy was bouncing back, whereas all Biden could say was that he would continue lockdowns and hopefully the economy would bounce back later, presumably because of the “millions of jobs” from Green energy policies

.
On the all-important subject of how the election results would be accepted by the candidates, Trump was evasive, whereas Biden came off statesmanlike, correctly stating, in my opinion, that both candidates would have no choice but to accept the results when the votes were tallied. That’s how elections work in a democracy, and whatever Trump’s reservations about the fairness of the vote, he should have been able to agree to that, but he pointedly did not.

Foreign policy wasn’t much discussed during the debate, but, contrary to Trump’s legion of detractors, it has been a strong suit for the president: tough on China and Iran, middle east peacemaker, shaking up the status quo on the Israel-Palestine conflict.

Still, the president’s behaviour last night so denigrated his office that it’s hard to see how anybody except his most strident backers could enthusiastically support him. If I were American, I might hold my nose and vote for him as the lesser of two evils, given the collapse of law and order in the cities – which pundit Andrew Sullivan rather incredibly laid at the feet of President Trump – and because of similar misinformation and cheerleading for rioting, looting and cancel culture by a mainstream media that has lost its raison d’etre, if not its collective mind, which only Trump has opposed forcefully.

As it happens, I’m so glad I don’t have to make that choice.