This is Clayton Swisher, of Al Jazeera’s “Transparency Unit”: 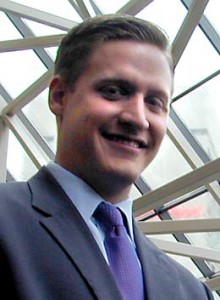 In 2011, Al Jazeera’s “Transparency Unit” published the Palestine Papers, which revealed the chasm between popular Palestinian Authority rhetoric, and their more moderate positions during negotiations.

The leaks highlighted how the PA disliked Al Jazeera, complaining that the Qatari-based channel seemed to take Hamas’ side. (NB Qatar has funded Hamas for years).

Al Jazeera has now turned its focus back on the PA.

From the team that brought you the Palestine Papers, and the scandalous revelation that a Jordanian politician almost allowed a casino to be opened in a Muslim country (a country which Al Jazeera keenly points out has opened “dozens of bars and nightclubs”!!!) – Al Jazeera now brings you an investigation into the death of Yasser Arafat, and the role of the PA in this.

Problematically, Al Jazeera had to explain why Arafat’s widow Suha refused an autopsy in 2004.

At the time, the PA requested an inquiry into Arafat’s death, but Arafat’s physician thought it pointless to start one without an autopsy. To solve this, Al Jazeera reported that Suha was never offered an autopsy and never asked for one either.

This is where it gets a bit complicated.

Al Jazeera picks up on the PA’s panic in their documentary, showing Palestinian officials bumbling around looking annoyed at Al Jazeera crew, and breaking into their hotel rooms.

The PA’s panicked employment of Russian scientists is held up as evidence that something even more dodgy is taking place. It is implied that the PA is trying to cover up the poisoning of Arafat with polonium.

So let’s look at the evidence presented by Al Jazeera. Firstly, there was a Swiss university lab that examined Arafat’s body and clothes. They stressed:

The results of all the measurements conducted were negative, except for those relating to Polonium-210. The interpretation of these measurements is difficult, because the measured values are low and the normal reference levels are imperfectly known.

‘“He pointed out that polonium would be naturally produced in the bones of anyone buried as a by-product of the bones absorbing lead from the soil, a point, he said, that “the authors of the report understand but the journalists do not”. The Swiss researchers’ carefully worded report admits that even in the tiny samples of non-bone body remains it found in the grave “no significant amount of unsupported polonium-210 was measured”.  They also admit that the pattern of Arafat’s illness was “not consistent with typical acute radiation syndrome”.

The Swiss report itself made interesting reading:

There was a lack of adequate biological specimens, thus limiting the possibility to perform further analyses. This was partly due to the fact that the blood, urine, fecal and cerebrospinal fluid samples taken during the patient’s hospitalization at Percy were subsequently destroyed. In addition, there were no samples taken at an early stage when the initial symptoms developed.

As a result, our initial investigations were performed on very small specimens, such as a single hair shaft, or on atypical specimens, such as the sweat in the patient’s clothing or traces of blood and urine found on his personal effects in the travel bag. The same investigations were performed on biological specimens (hair, bone, scalp) and on non-biological specimens (soil, shroud fragments) collected after exhumation of the deceased in Ramallah. In any event, all of these specimens proved problematic in terms of their analysis, as well as for the interpretation of the results. We have limited experience working with such specimens and very little has been published in the scientific literature. […]

“Taking into account the analytical limitations aforementioned, mostly time lapse since death and the *nature and quality of the specimens*, the results moderately support the proposition that the death was the consequence of poisioning with Polonium P-210.”

As well as the polonium naturally produced by Arafat’s body, much of the evidence used by the Swiss scientists was from Arafat’s clothes as found in a gym bag.

And how did that gym bag get to Switzerland?

Suha Arafat stated that the bag was kept in safely custody for the past eight years, primarily with her lawyer and in a safe room on the fourth floor of a building in Paris. She did not elaborate on the precise address. She stated that it was kept there until it was retrieved in late January 2012 for Clayton Swisher to deliver to the Swiss laboratory.

As the Swiss report admits, rather bashfully (p.66):

Finally, the “chain of custody” of the speciments contained in the bag cannot be documented between the death in November 2004 and their reception in Lausanne in February 2012.

Al Jazeera, of course, is the channel that threw a birthday party for anti-Israel child-murderer Samir Kuntar.

Everything about this story is suspicious!