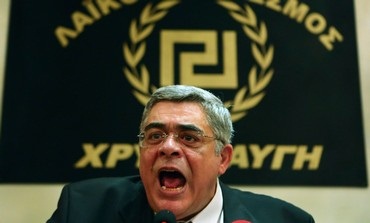 If some of us are pleased and optimistic about the results of the French presidential election, I hope all of us can agree it’s cause for some alarm that a party like Golden Dawn won almost 7 percent of the vote (and 21 seats) in the Greek parliamentary elections.

Now why in the hell did some of the journalists actually rise as ordered?

Update: Here’s more on the thug who ordered the journalists to rise in honor of Golden Dawn’s Führer. It turns out he is a bassist in a black metal band and was elected to parliament on the party’s list.