A principle sometimes discussed here is “opposing extremism in the round”. It means opposing the vile racists of the BNP, the horrid thugs of the EDL, and Islamist hate preachers as well.

Here is a case where ”in the round” has failed.

Abdul Qadir Baksh is a prominent imam at the Luton Islamic Centre. Just this month he took part in opposition to the EDL march in Luton. Socialist Worker was pleased:

Qadeer Baksh, the chair of Luton Islamic Centre, said, “The EDL have come here to spread fear and Islamophobia.

“Lutonians have lived side by side for years, and you can see that here. Muslims, white people, black people all wanted to come here today to show the real face of Luton.”

Baksh is an interfaith worthy too:

REPRESENTATIVES from Luton Council of Faiths say that action is needed to ‘wage peace’ not war in Luton.

Labour politicians line up alongside him.

Well, Mr Baksh is a fan of David Duke, the former Grand Wizard of the KKK. 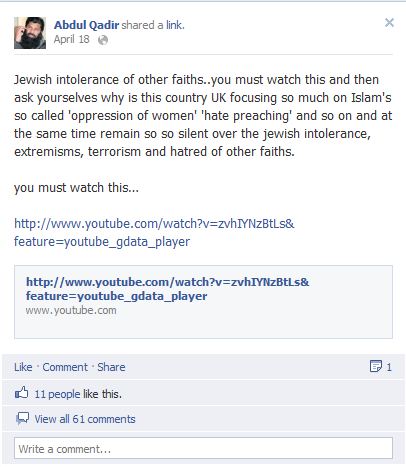 you must watch this…

See Mr Duke in hateful action for yourself if you must.

This is nothing new at the Luton Islamic Centre. This blog has documented its shocking extremism in the past.

For more, try a Baksh sermon during the Gaza war, when he painted the conflict as the latest episode in a 1,400 year-old battle with “the Jews”.

Or read this (pdf) from his mosque’s website. Did you know that Freemasonry, among other things, is a Jewish plot?

The zionist war is just the same. The jews strive their utmost to corrupt the beliefs, morals and manners of the Muslims. The jews scheme and crave after possessing the Muslim lands, as well as the lands of others. They have fulfilled some of their plans and continue striving hard to implement the rest of them. Even though they do engage the Muslims in warfare involving strength and arms and have occupied some of their lands, they also fight them by spreading destructive thoughts, beliefs and ideologies; such as Freemasonry, Qadiaanisim, Bahaaism, Teejaanism and others – seeking the support of the christians and others, in order to fulfill their objectives.

I am sure British “anti-fascists” and “anti-racists” will mend their ways very soon by protesting and demonstrating against Mr Baksh as well as the EDL.

You’ll remember that the Luton Islamic Centre was in the news for having ‘turned away’ (but not reported to the police) a suicide bomber who later killed himself in Sweden. You may also remember that their website was filled with extreme homophobic and racist material, which naturally included sectarian attacks on the Shia Muslims which echoes the worst rhetoric of the EDL.

An irony, here, is that the secretary of the Luton Islamic Centre is Farasat Latif, who was formerly an activist in Anti Fascist Action!