On December 15, a multifaith “peace procession” will take place in East London. However, one of the leading institutions involved in this event is a regular hoster and promoter of murderous homophobes, vile racists, supporters of terrorism, and enemies of liberal and democratic values.

That institution is, of course, the London Muslim Centre/East London Mosque: which has over the last five years has received public sector funding totalling £2.6 million.

Jews will be represented by Rabbi Jonathan Wittenberg, Christians by the Bishop of Stepney, and Muslims – not by a religious figure – but by a community politician associated with the ELM/LMC: its Chairman, Mohammed Abdul Bari.

Community leaders are to stage a ‘peace procession’ through the heart of East London to reclaim the streets following the August riots.

You need only put the “London Muslim Centre” into the search engine at Harry’s Place to uncover the central role which this institution has played in promoting hatred of minorities over the years. You will note that the London Muslim Centre/East London Mosque, when confronted directly on hate preachers, will either attack the accusation as Islamophobic, or issue a mealy mouthed statement insisting that this is the absolutely very last hate preacher they will ever ever host. Until the next one.

Want to see the ELM/LMC’s lie machine in operation? Here you go. This one contains the most egregious falsehood of all: 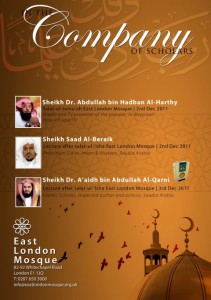 Here is what Sheikh Saad al-Beraik is reported to have said:

Muslim Brothers in Palestine, do not have any mercy neither compassion on the Jews, their blood, their money, their flesh. Their women are yours to take, legitimately. God made them yours. Why don’t you enslave their women? Why don’t you wage jihad? Why don’t you pillage them?

[at 53:48] Today some people are prepared to send messages on Twitter and Facebook, “Come on, let’s go down into the street [i.e. protest]…’ and they do not know that they could be the first funeral on that day. People must know that the interest of ‘preserving security’ comes before hundreds of skulls.

[at 55:23] All of us believe …  that we are content with the crushing of any skull that messes with the security because of the saying of the Prophet :

“Whoever comes to you and warns you, the community, about one of you then kill him…”

The Saudi hate preacher isn’t the only vicious extremist in the next few weeks at the ELM/LMC. On Saturday, for example, you could go to see Azad Ali: the man who praised Al Qaeda’s Anwar Al Awlaki, supported the killing of British soldiers, sued when it was reported but lost the  libel action, declared his opposition to democracy if it conflicted with Sharia, and argued that Hamas’ Haniyah would make a great Caliph to guide the Ummah. He and the Saudi Sheikh will get on brilliantly.

Now, why would a nice, thoughtful and liberal rabbi like Jonathan Wittenberg agree to participate in a “peace procession” – of all things – with an institution which promotes this level of hatred, not simply at Jews, but generally? Why for that matter would the Bishop of Stepney ally the Church of England with one of the worst and most extreme institutions in the United Kingdom?

The answer is that he has been invited by Neil Jameson of London Citizens, who is behind this event:

“This will help them understand where their history is,” added Mr Jamieson, founder of Telco, The East London Communities Organisation which is staging the procession. “It’s richer and more significant to their lives than learning about kings and queens.”

If you read this article, you will know that Neil Jameson regards it as his obligation both to promote and defend the ELM/LMC. The institution and its personnel – including outspoken Hamas supporter Junaid Ahmed – occupy the key positions in this organisation. At times, it appears that the primary function of London Citizens is to legitimise and protect the ELM/LMC from criticism over its history of promoting hatred.

“The JC named me today for my participation in events held by London Citizens, criticising the organisation because of the role within it of a Muslim leader who, the paper shows, expressed support for Hamas during the Gaza war. I abhor such views and expect London Citizens to take this matter most seriously.”

We have to take risks to engage with each other. The Jewish community will be far weaker if we all shelter within a comfort zone labelled ‘They all hate us out there’.

Let me be frank. Not everybody hates Jews. In my experience, many of the strongest defenders of Jews against rabble rousers and hate preachers are Muslims who are liberals. That is because wise liberals look out for each other, and stand together against the threat that murderous totalitarian theocrats present to us all.

The East London Mosque is not a liberal institution. Rather, it is a promoter of the worst forms of extremism that the Middle East has to offer. It actively seeks to import these hatreds into the United Kingdom. Then, with the help of Neil Jameson and London Citizens, it uses liberal Rabbis to deflect criticism.

Liberals owe a duty of solidarity  to each other. Assisting our foes betrays that duty.