As I posted earlier this week, President Obama delivered a speech in Kansas affirming his commitment to economic fairness and invoking an earlier president, Theodore Roosevelt, who delivered his famous “New Nationalism” speech in the same town (Osawatomie) a little more than a century ago. 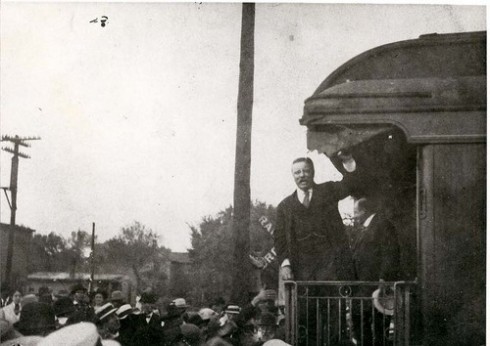 Among other things, the then-former president said in 1910:

The absence of effective state, and, especially, national, restraint upon unfair money getting has tended to create a small class of enormously wealthy and economically powerful men, whose chief object is to hold and increase their power. The prime need is to change the conditions which enable these men to accumulate power which it is not for the general welfare that they should hold or exercise.

While Obama embraces the spirit of the Republican Roosevelt, conservative Republicans have gone to some lengths to put some distance between themselves and TR.

In May [conservative columnist George] Will complained that presidential candidate Tim Pawlenty sounded "like a dime-store Teddy Roosevelt" and added, parenthetically, "the real TR was bad enough." On National Review Online Michael Knox Beran has complained of TR, "Rather than use government to promote freer, more competitive markets, he used it to promote government itself." Need I remind you that TR was for Obamacare before even Mitt Romney?

The Heritage Foundation’s Web site reproduces TR’s "New Nationalism" speech and, in a preface, explains that this was a key historical turning point that put America on the road to serfdom:

"The radical change from the Founders and Lincoln is clear: In the name of ‘national efficiency,’ Roosevelt calls for ‘real democracy.’ Society’s needs become the measure of individual rights. ‘We should permit [fortunes] to be gained only so long as the gaining represents benefit to the community.’ Such an admittedly dramatic ‘increase in government control is now necessary.’ He proposes a ‘Federal Bureau of Corporations.’ There follow graduated or progressive income and inheritance taxes on ‘big fortunes.’ Thus, the federal and state Departments of Agriculture should ‘extend their work to cover all phases of farm life.’

"But the regulation of the national economy requires control over private life as well. In order to fulfill government’s purpose of serving the welfare of the people, Roosevelt demands ‘a genuine and permanent moral awakening.’ The federal government must even mold the family and education to guarantee Progressive results. The ‘New Nationalism’ stands not only for a strong military and global presence but also nationalization of life generally."

Last year Glenn Beck (who used to be a big deal on the right) identified TR as pretty much the antichrist. Yesterday on Fox News, correspondent Chris Stirewalt said,

"What Teddy Roosevelt was calling for was sort of a socialistic nationalism in which the government would take things away from people who got things that he didn’t think they should have, give it to the working man, they talk about the square deal, fairness, all of these new mandates for government, something the Republican party has walked away in very decided fashion certainly since the Reagan era, in terms of what the role and purpose of government is."

The distinguished presidential historian Megyn Kelly chimed in: "Teddy Roosevelt was calling for something akin to a socialist nationalism," prompting Stirewalt to reply, "Exactly." Kelly then puzzled over why Obama would embrace so obvious a scoundrel: "Why would President Obama want to do anything that would associate himself with that word, ‘socialist,’ which has been used against him by so many of the current Republican presidential candidates, among others?"

I think maybe she was confusing TR with Emma Goldman. An easy enough mistake to make.

Now if only there were some way to get rid of that third president from the left carved into Mount Rushmore. 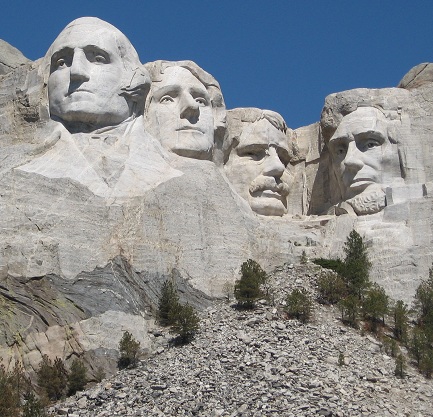 To save the cost of blasting, a more budget-conscious solution might be something like this, which would require only a few hundred buckets of black paint.: 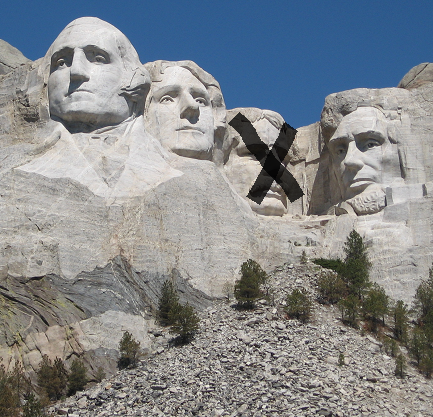 … Roosevelt was a reformer who worried that unless America’s disparities of wealth were addressed there might be a Marxist revolution. It sounds quaint today, but Republicans (and Progressives) used to worry about that sort of thing. Here’s what TR wrote in his 1916 autobiography:

"I have always maintained that our worst revolutionaries today are those reactionaries who do not see and will not that there is any need for change. Such men seem to believe that the four and a half million Progressive voters, who in 1912 registered their solemn protest against our social and industrial injustices, are ‘anarchists,’ who are not willing to let ill enough alone. If these reactionaries had lived at an earlier time in our history, they would have advocated Sedition Laws, opposed free speech and free assembly, and voted against free schools, free access by settlers to the public lands … and the abolition of imprisonment for debt; and they are the men who today oppose minimum wage laws, insurance of workmen against the ills of industrial life and the reform of our legislatures and our courts, which can alone render such measures possible. Some of these reactionaries are not bad men, but merely shortsighted and belated. It is these reactionaries, however, who, by ‘standing pat’ on industrial injustice, incite inevitably to industrial revolt, and it is only we who advocate political and industrial democracy who render possible the progress of our American industry on large constructive lines with a minimum of friction because with a maximum of justice."

Aren’t you glad we don’t have anybody like that today?