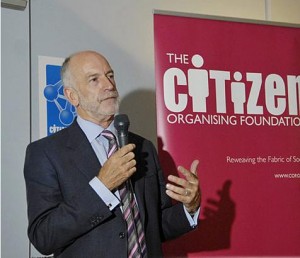 Neil Jameson is the founder of London Citizens, a “community alliance” of religious and social groups.

Junaid Ahmed is a deputy chair and a trustee of London Citizens, which lists him as a representative of the East London Mosque. He is also an activist and trustee for the Islamic Forum of Europe (IFE). It is the Islamist group based in the mosque’s London Muslim Centre.

Junaid Ahmed is an ardent supporter of Hamas, as revealed last week. Here he hails Ismail Haniyeh, the Hamas leader in Gaza, as “our leader” at a meeting in London in 2009. He went on to salute other Hamas leaders and fighters too as examples for Muslims to follow.

More of the speech can be seen here.

Neil Jameson distributed London Citizens’ response to the revelations. This line captures the denial at work in the face of video evidence:

Our Lead Organiser, Development Director, several colleagues and a Trustee have studied Mr Ahmed’s Speech at some length.

They take the clear view that he neither promotes or condones terrorism, nor expresses support for any proscribed organization in what he said in that Speech.

What Neil Jameson wants is the “common good”. Helping extremists with denial rhetoric is not the way to achieve it. Yet this is what he has done, repeatedly.

Listen to him interviewed on Islam Channel by far left activist John Rees in March 2010 for an illustration. In the aftermath of Channel 4’s Dispatches investigation of the IFE and the mosque that hosts it, he was incensed:

John Rees opens with this question:

Jameson jumps at the cue:

The East London Mosque is not “excellent”. It is a problem for London. It has a long record of hosting extremists, as this blog has documented.

Its own imam, Abdul Qayyum, is a signatory of the inflammatory pro-Hamas Istanbul Declaration. The mosque’s denial of this fact was contradicted at the time by the conference organisers’ own website, which listed the signatories, including Qayyum. Nor has the mosque explained why Qayyum was at a jihadi meeting in Turkey in the first place, with fellow signatories Daud Abdullah, a prominent Hamas supporter, Mohammed Sawalha, a Hamas operative, and Tunisian Islamist Rashid Ghannoushi for British-based company.

Furthermore, in a Friday sermon at the mosque during the Gaza war Qayyum said people who questioned Hamas for fighting and thought they should compromise were simply making “wrong comments”.

The story runs right up to this month, when the mosque welcomed several speakers who have supported the murderers of British troops on active service abroad. Those speakers included John Rees.

Never mind, Jameson didn’t want to know in March 2010, as he doesn’t now. This is how he continued in the Islam Channel interview with Rees:

So I thought the programme was mischievous. It implied stuff that doesn’t happen. And frankly it could put off cautious Muslims from participating in any form of politics.
…
A programme like that discourages people from getting involved in politics. In a way you can’t win. The more Muslims get involved in politics, they’re called separatists, effectively, or entryists. If they don’t get involved, they’re called sort of, you know, “staying in the ghetto”.

This misleading “damned if we do” talk was the IFE’s exact message at the time, and Jameson was on it virtually word for word.

In another segment of the Rees interview, he followed up with a very low charge of bigotry, as if he were some champion of the British ages:

What we have experienced recently is frankly, what the Muslim community is experiencing, is exactly like what the Catholic community experienced 200, 300 years ago..Whenever a minority organises to take seriously the political process, the political elite jump on it and say “who do you think you are?”. And I think that is what we are experiencing here. It may be racist, but it equally raises some sort of fear.

What about the allegations of vote rigging? Pah, Jameson will believe what he wants to believe:

The Muslim community is very well-organised and that‘s one of the splendid things about them. But in a way the threat, and it shouldn’t be seen as a threat, it should be seen as a blessing, that people are getting involved, are voting, are joining the Labour party.

One of the points that was made, and it somehow came across as a mystery, is to why suddenly Tower Hamlets has more members in the Labour party. I’d like to think that is because Rushanara Ali, the Labour party candidate, is a reasonable candidate. Hopefully she has organised them into joining the Labour party. If IFE has too, then that’s fine. That should not be seen as something mysterious.

You see, the mosque’s meeting centre is “magnificent”:

It [the Dispatches broadcast] has done considerable damage certainly to the view of what is a magnificent centre, the London Muslim Centre, for which the programme said not one good thing. That has absolutely not been our experience on a daily basis.

It [the Dispatches broadcast] has done considerable damage certainly to the view of what is a magnificent centre, the London Muslim Centre, for which the programme said not one good thing. That has absolutely not been our experience on a daily basis.
…
As I say, I think the programme has done a lot of damage. It’s very unfortunate that Jim Fitzpatrick, a highly respected MP in East London here, has chosen to, firstly, not come on your programme, and secondly front the Gilligan programme, since that has done him some damage, potentially.

Jameson also wrote a glowing letter to the mosque after the Dispatches broadcast. He actually wants more of their extremist politics and less investigative journalism, sorry, “stereotyping”:

The East London Mosque won Citizens’ “Community of the Year” accolade in 2008 for its many efforts to promote the common good and ensure that its young people understand politics, vote and are sound and informed British Muslims.
…
It has been my experience of twenty years of community organizing that faith communities working, learning and acting together on social justice issues is a far better way of challenging totalitarianism and the BNP than negative and ill informed stereotyping. I wish we had more institutions in our neighborhoods like the East London Mosque and more outward looking associations like the Islamic Forum Europe.

Jameson’s views are made clear again in his contribution to a puff piece for the mosque in the magazine emel.

“There’s no question it benefits the whole community. The mosque leads on promoting community cohesion,” says Neil Jameson, executive director of civil engagement group London Citizens. “It has been an outstanding active participant in the work we do.”
…
Neil Jameson from London Citizens says he has been working with the mosque for 15 years and accusations of it being “extreme” are “completely foreign” to him. “Absolutely, they are moderate. They are interested in community life and are very committed to it,” he says, adding that criticism of the mosque tends to come from outsiders.

Are the East London Muslims who were so critical of the IFE in the Dispatches broadcast “outsiders”?

There’s more in a group letter to the Guardian which Jameson signed in March 2010. It is a scurrilous attempt to bracket investigation of the IFE with the EDL. Its reference to persecution of Jews is noticeably offensive when so many Hamas supporters and antisemitic preachers have been welcomed at the mosque.

The East End of London is not new to having its communities attacked by fascists and the media. The 1930s saw the Battle of Cable Street when Oswald Mosley’s blackshirts attempted to march into the Jewish community in the area. We cannot allow this terrible history to repeat itself. Further, the documentary, and articles since, have attacked the participation in politics by the Muslim community. We cannot stand by and watch this continue without remark or action.

In the runup to the general election, all parts of the population should be actively encouraged to exercise their votes. That is
democracy. We welcome the work of organisations who work to this end. We call for solidarity and support for those organisations that work to encourage political participation from all sections of society, including Muslims, and condemn those who seek to undermine it.

That letter was followed up by a “get Gilligan!” meeting at the end of March 2010. It featured the IFE, Jameson, and two of the least credible witnesses on Islamist extremism in all of Britain, George Galloway and Robert Lambert.

Over 400 people packed the London Muslim Centre next to Whitechapel’s East London Mosque on Tuesday to discuss the role the media and politicians play in encouraging Islamophobia.

Speakers included Muhammed Habibur Rahman from the Islamic Forum of Europe, Ex Police Commander Dr Robert Lambert, George Galloway MP and Neil Jameson from London Citizen [sic].
…
All speakers on the platform attacked the programme, arguing it provided no real evidence for its accusations and implication that Muslims have no right to political representation. The case was made that it was an irresponsible piece of journalism which helped create an atmosphere of hostility towards Muslims.

What “implication that Muslims have no right to political representation”? That’s some typical slander of those times, taken from a report of the meeting published by the far left activists of “Counterfire”.

Coming back to the present, here is another line from the London Citizens statement after Junaid Ahmed was exposed:

He [Ahmed] has again clarified, to my satisfaction, that he did not and does not condone terrorism and that he has consistently condemned all acts of terror on every platform on which he has spoken. He concludes his statement by saying, ‘My commitment to working for the common good and my desire to build and foster strong and mutually respectful inter faith relationships is on the record for all to see’.

More fool Jameson and his fellows. According to an IFE blog, Junaid Ahmed will not climb down at all:

“I delivered this speech during the height of the illegal invasion and war against the population of Gaza in 2008/09. Over 1300 innocent people were killed and evidence emerged that illegal ‘white phosphorous’ chemical bombs were being used against civilian populations. Henceforth, I make no apology for being emotional. My faith teaches me to stand up for justice and speak against the death of innocent children, women and men.”

“Over 1,300 innocent people”? In other words, practically all the victims of the war? Here Ahmed opts for a “more Hamas than Hamas” outburst. The terrorist group itself has admitted to at least 700 losses in the war.

London Citizens does not get it and does not want to, even though extremism and terrorism are among the most serious problems facing London.

That is why it should only be granted the smallest of roles in any Big Society, which is the prize it is chasing now.