Last night, I attended a debate between the Reverend Dr. Stephen Sizer PhD, Vicar of Christ Church Virginia Water, and the theologian Calvin Smith. Sizer and Smith were present to discuss the theological topic, “Has the Church replaced Israel?”

Calvin Smith ably challenged Sizer’s understandings of covenants in the Hebrew Bible, and the way he applies this to Middle Eastern politics. When Smith pressed Sizer on his theology about Jewish exile in the Bible, Sizer replied to Smith:

“I fear we are heading for an exile – not a restoration – from the land – based on the actions of the Israeli government.”

Whilst various theological issues were discussed, I do not believe that Sizer’s theology can somehow be separated from his questionable activities, allying himself with extremists of various shades, including Malaysian racists and parts of the American and global Far Right.

Yet it became apparent throughout the course of the debate, that Sizer had set limits upon what could or could not be discussed. Racism, antisemitism and politics appeared to be off-limits.

Debating with Stephen Sizer about theology, is rather akin to a debate with Nick Griffin about immigration, in which you are not allowed to talk about his views on black people.

I said this to the organisers of the debate. They acknowledged that next time, should Sizer choose to return, it would be good to have an open debate on racism and antisemitism with him.

When Smith asked Sizer whether he accepted the fact, that Mahmoud Ahmadinejad had threatened the existence of the Jewish state, Sizer admitted that:

“Ahmadinejad has made provocative statements along those lines.”

This raises the question – if Sizer recognises Ahmadinejad’s antisemitism, then why did he go to Iran for a joint political project, against Christian Zionism?

Smith also asked Sizer directly, why he went to Iran.

Did Sizer go to Iran, to share the gospel?

Stephen Sizer went to Iran in 2006, where he joined hands with the Ayatollah Khomeini’s daughter, Zahra Mostafavi.

By his own admission, Sizer was invited to Iran by Mostafavi. His tour was organised by Dr. Jawad Shabarf, who heads up the NEDA institute. The NEDA institute has previously called on the services, of Holocaust denier Robert Faurisson, to help organise the Iranian Holocaust denial conference.

The X-ray machine at the end of the green customs channel reveals the contents of my over-full suitcase. My answer to the question, “What have you got in here?” necessitates a detour back through the red channel where several security staff examine my pay load of Christian literature, books, CD’s and DVD’s I have brought at the request of my tour organisers. The invitation letter from Dr Mostafvi helps convince them that my primary objective is not to plant a church.

Sizer convinces airport staff, his mission is specifically not to spread the Good News!

Here is Sizer in a meeting with Zahra Mostafavi and other officials:

Mostafavi has published Rev. Sizer’s book on Christian Zionism, translating the work into Farsi, and promising a Hebrew translation too: 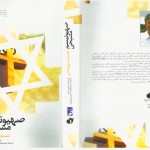 Sizer also claimed to have extensive links with the Green Movement in Iran. Last time he blogged extensively about the opposition movement in Iran, he used the arrest of Zahra Eshraghi, to try and convince his readers that he went to Iran to support the reformers. He wrote:

Two years ago I took part in a lecture tour of Iranian universities at the invitation of Dr Zahra Mostafavi, the daughter of the Ayatollah Khomeini. Predictably, I was accused by Zionists of siding with the Iranian regime, with holocaust deniers, and those who allegedly want to ‘wipe Israel off the map’, etc, etc. I am glad that what I always knew but could not say at the time has been made public – that they are part of the opposition movement to the Iranian regime.

This claim is demonstrably false – Sizer was not invited to Iran by the reformer Eshraghi, but rather by the hardliner Mostafavi, on behalf of government-supported institutions in Iran such as NEDA.

I think Sizer has more in common with Iranian hardliners than reformists.

He has recently published a series of photos on his blog, of an IHRC meeting he attended, entitled “Join the Revolution“.

Last night during the debate, Sizer mentioned the community of Christian believers in Iran in a positive light.

Yet Sizer has attempted to harmonise his particular brand of Christian antizionist liberation theology, with Khomeinist antizionist theology, hand-in-hand with the Khomeinist stooges of the IHRC.

In 2005, he attended an IHRC conference aiming towards “a new liberation theology on Palestine” – alongside Rima Fakhry of Hezbollah and terror advocate Achmad Cassiem,

He claimed last night, that he is now banned from Iran, because he has spoken up for the rights of Christians in Iran. Sizer has worked with the IHRC since 2005, and he only began to speak in publicly against Iranian treatment of Christians, in 2009.

In between, he secured a book deal with Dr Mostafavi and an trip to Iran meeting with senior political and religious leaders.

Sizer has had his fun, debating the theology of Christian Zionism.

The more pressing concern, is surely that Sizer explains the following:

why he is happy for his works – which contain 9/11 conspiracy theorising and a quote from a Holocaust denier – to be translated and distributed by the Iranian regime, whilst the same government persecutes Christians, arranges to hang pastors, and confiscates Bibles.