While Bashar al-Assad was intent on warning Western countries against intervening in Syria– saying it could cause an “earthquake” and “another Afghanistan”– it seems his regime is facing a bigger threat from his once-friendly neighbor Turkey.

The New York Times reports that the Turkish government is “providing shelter to the commander and dozens of members of the [armed opposition] group, the Free Syrian Army, and allowing them to orchestrate attacks across the border from inside a camp guarded by the Turkish military.”

The support for the insurgents comes amid a broader Turkish campaign to undermine Mr. Assad’s government. Turkey is expected to impose sanctions soon on Syria, and it has deepened its support for an umbrella political opposition group known as the Syrian National Council, which announced its formation in Istanbul. But its harboring of leaders in the Free Syrian Army, a militia composed of defectors from the Syrian armed forces, may be its most striking challenge so far to Damascus.

Meanwhile it’s worth noting that despite the angry rhetoric Prime Minister Erdogan has aimed at Israel, especially since the Mavi Marmara incident, Turkey accepted the donation of portable structures from Israel to provide shelter for survivors of the recent earthquake in eastern Turkey.

That’s quite a contrast with the Iranian regime, which– after the terrible 2003 Bam earthquake— announced: “The Islamic Republic of Iran accepts all kinds of humanitarian aid from all countries and international organizations with the exception of the Zionist regime [Israel].” 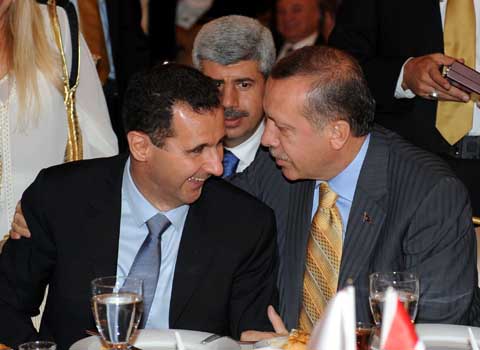 Assad and Erdogan in happier times

Update: Tehran Bureau reports on the recent deterioration of relations between Turkey and Iran, including this interesting bit of news:

To add insult to injury, Ankara agreed on September 15 to install U.S. radars on its soil within the framework of a NATO antimissile defense shield deployed mostly to defend against Iranian missiles. As Tehran knows well, the shield primarily helps defend Israel from an Iranian missile threat, thereby weakening one of Iran’s key military capabilities against its declared enemy.