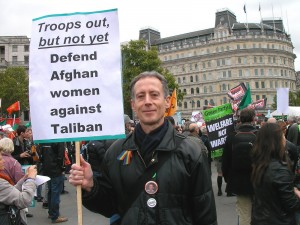 In recent days, Peter and I have engaged in an exchange of our differences on the crucial matter of Afghanistan. I’d like to think I helped him disabuse himself of several widely-held misconceptions about the Afghan struggle for peace and freedom. But what I know for certain is that to the extent that Peter changed his mind – and indeed he did quite substantially revise his position – he did so on the basis of hard evidence. Another thing I know is that he changed my mind: I’d argued that he’d be making a grave error to play any role in the Trafalgar Square event. I was wrong.

“The turn-out at today’s anti-war protest in London was surprisingly low. Only 3,000 people [Peter followed up with a note saying this estimate was probably “on the generous side” and that perhaps as few as 2,000 came to the rally]. The organisers had expected 10,000 to 20,000 or more.

“The names of a selection of the war dead were read out: but only the names of British soldiers and Afghans killed by NATO forces. The names of Afghan civilians murdered by the Taliban were not read out. The suggestion was that all the Afghan civilian deaths over the last 10 years were the result of NATO attacks, which is not true. Indeed, from the stage there was hardly any mention of the murderous crimes of the Taliban. I only heard one out of about 20 speakers criticise – or even mention – the Taliban.

“The placards carried by myself and my Peter Tatchell Foundation colleague Ashley McAlister were the only ones in the entire 3,000-strong protest to condemn the Taliban. Our placards read: ‘Troops out, but not yet. Defend Afghan women against Taliban” and “No NATO. No Taliban. Peace, Democracy & Freedom for Afghans.’ We got a handful of sneers from fellow protesters but mostly support, which was heartening. Many people at the protest did not share most Stop The War speakers apparent lack of concern about the threat posed by the Taliban.

“It was claimed by some speakers that Afghan women had made ‘no progress’ since the NATO invasion and the overthrow of the Taliban. This failure to acknowledge the hard won gains of Afghan women (imperfect but improved) is profoundly shameful and dishonest.

“I’m against the war. The current war-fighting strategy is flawed. There are too many civilian casualties. Western troops should focus on peace-keeping and training the Afghan security forces. Funding should concentrate on economic reconstruction and empowering civil society. Afghan’s who have jobs, income, houses, health and education are less likely to be attracted to the Taliban or to tolerate them. If they see their lives getting better under an attempted (albeit flawed) democracy, support for the Taliban will wane even more. Instead of destroying the poppy crops, which is driving some farmers into the arms of Taliban, the West should give them an equivalent price for growing food. Or buy up the poppy crop and use it for medicinal purposes.

“I don’t believe the West can impose solutions. What we do in Afghanistan should be determined solely by the interests of the Afghan people, not by western geo-political interests. The days of neo-imperialism are over – or should be.”

In his follow-up email, Peter reports:

“I was gratified that most of the grassroots protesters who indicated an opinion seemed to agree that the Taliban are a problem and cannot be ignored. They apparently don’t share the moral and political blind spot of virtually all the speakers in Trafalgar Square.

“Most the anti-war protesters who came up to me and Ashley to thank us for our placards were women and nearly all expressed fear for the fate of women if the Taliban returned to power.”

All to the good. People need to properly inform themselves, and should stop allowing pseudo-leftish celebrities tothink and speak for them.

Nevermind that there are still misunderstandings that obviously bedevil Peter’s analysis. Nevermind that. Peter Tatchell went to an “anti-war” rally in London today, and I am perfectly content that he did.

Meanwhile, my friend Sam Westrop was also there. Sam’s brief report in the Jerusalem Post is here.