This is a cross post by Anthony Cooper from Exposing Antisemitism

Israel has at last perfected the means of murdering the Palestinians without any risk to its own dear soldiers. Jewish mothers can sleep in peace in Tel Aviv whilst their beloved children safely play computer games and the real victims’ slaughtered and maimed bodies lie obliterated many kilometres away. No mournful graveside recitals of kaddish to be endured in future wars, no more tears, no flag covered coffins. Rejoice! The Jewish dream has come true. [emphasis added]

When challenged, the response was:

Excellent video; one can see why more and more Americans back home such as the Tea Party supporters are becoming less and less enamoured with their Jewish compatriots who put Israel’s interests above those of their own country.

Seymour Alexander has also registered the website accessol.co.uk. That website has (it seems) only one page which says:

The panel meeting with Gilad Atzmon, Alan Hart , Karl Sabbagh and Sameh Habib proved to be a fascinating, outspoken and of course controversial discussion, assisted in the audience by a clutch of some prominent intellectuals in the Palestine solidarity community.
These notes are not intended to represent the view of any particular speaker but are intended to give a flavour of the discussion that took place.

It’s not clear whether Seymour agrees with the notes but they say:

What is the difference between an anti-Semite in the past and today? There is a joke which says: in the past an anti-Semite was someone who hated Jews; today it is someone whom the Jews hate. In effect today there is no anti-Semitism in this country; what people object to is Jewish control of the media and the power of Jewish money; they object to our government’s subservience to the interests of the state of Israel. But they do not hate Jews simply because they were born Jewish.

we are supposed to believe that in 1933 the cultured German people suddenly changed overnight into anti-Semites and decided they wanted to kill the Jews.

However if one is looking for causes for the Holocaust (and not excuses for it of course) one could mention the perceived betrayal of the German people by the Jewish bankers who (together with the Russian Jewish bankers) were persuaded into using their influence and money to supporting American entry into the first world war on the British side by the promise of the Balfour Declaration, with its notion of a Jewish state in Palestine.

The Richmond and Kingstone PSC website also recommends an interview of the antisemitic agitator, Gilad Atzmon: 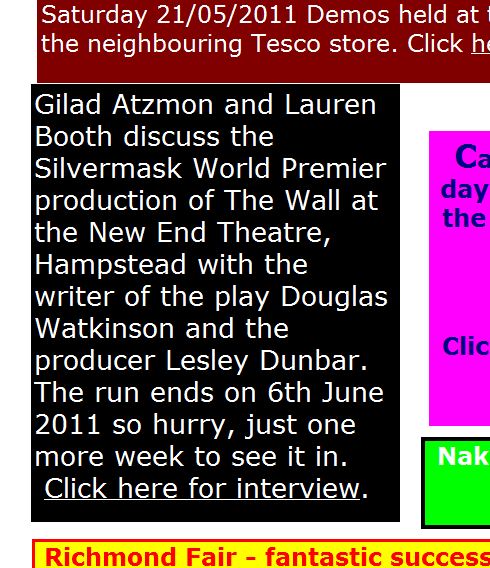