Hills Road 6th Form College is a really excellent state school, which in its previous incarnation was Cambridgeshire High School for Boys: the alma mater of half of Pink Floyd and of Martin Amis.

It has a head of drama, Martin Fredman, who has “written many plays, particularly for young audiences”, which is now being put on at Edinburgh. This is the poster: 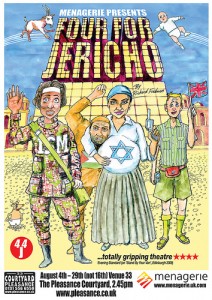 Here is a review of the play in The JC:

In a piece which the programme notes tell us is “informed by his Jewish background and his experiences in both Israel and on the West Bank”, the Cambridge-based playwright unleashes in the holy land and the West Bank Paul Brendan’s philosemitic, prattishly-attired Christian Sunday school teacher Michael Crossley.

Michael is an idealist, who sets off to film the Jews, “an incredible people”. But wait a second: maybe they’re not, after all. For up pops Chandrika Chevli’s Izzy, a member of the Palestinian-led International Solidarity Movement, which monitors Israeli settlements, and a Jew to boot, who tells him that what matters is “justice for the indigenous population. It’s about standing up against oppression”.

A couple of bickering taxi-drivers later, and the ingenue film-maker is off on a collision course with every archetype under the Israeli-Palestinian sun. These include Emma Beattie’s sour-faced, pot-bellied Rachel Finkelman, a gun-toting New York Jewish settler and mother-of-twelve, played as it on steroids; Chevli’s Dr Reem Qaddumi, a Palestinian activist and independent film-maker; and Fouad al-Rahmi, a downtrodden Palestinian goatherd, played (with a nice twist) by Jewish-Israeli Londoner Josh Becker. So, a fairly accurate representation of Israeli/Palestinian society.

As the frenzied action builds, Fouad is made to play a game in which he has to call himself “a Muslim pig” and to say his mother is “a whore of Mohammed”, and his home is demolished as a punishment for his activist son taking part in a demonstration against the “security wall”.

Rachel, meanwhile, kills a policeman when her illegal home is threatened by a bulldozer, and attempts to frame Fouad.

Careering out of control, the action ends in a ludicrously hammed-up car chase towards Jericho, with the journey broken up by dug-up roads, concerte roadblocks, security checkpoints, and the security wall slicing Arab villages in half. Why? “So that Palestine can never be,” weeps Fouad.

Here are some photographs of the production: 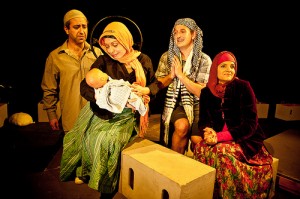 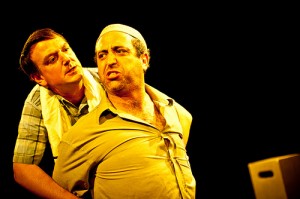 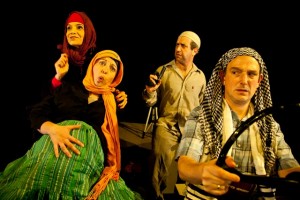 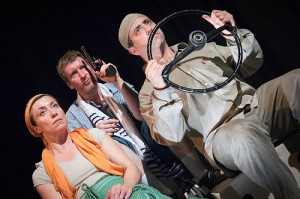 Fredman has form for this. Here is a report of his school production of Fiddler on the Roof, from a couple of years ago:

Fiddler has been revived many times. But the head of drama at Hills Road, Richard Fredman, seems to have had an ulterior motive when he announced that he was to revive it yet again. What this motive was remained a mystery until the day before his production was due to open.

According to the parents of one student in the production, Mr Fredman did a full run-through of the whole show but it was only at that point that it became apparent he had determined — without prior discussion with the students — to end the performance with video images of Israeli tanks and air strikes and Israeli soldiers rounding up Arabs.

The effect — presumably fully intended — was to turn the Hills Road Fiddler from a musical depicting Jewish suffering in the Pale of Settlement into a piece of anti-Zionist and even (some might argue) anti-Jewish propaganda. And to have duped the audience (not to mention members of the cast) in the process.

The school has offered two defences of this scam. The first, expressed by Mr Fredman in a programme note, suggests that what was intended was merely to bring Fiddler “up to date” by “dedicating this production to all people forced from their homes by intolerance, ignorance and fear.”

What can you say, really.

The trouble in Britain is the mindless shibboleths.

The previous generation had ‘South Africa’ as a convenient prefab issue which could be dropped into play or song to prove which side you were on. That is not, obviously, to question whether there were valid issues around South Africa (transparently there were) but simply to note that it didn’t take much artistic effort to comment and the rewards in terms of left-wing kudos were disproportionately high when compared to the effort. Criticising comparable human rights abuses in communist countries or other African dictatorships required much more effort for very little, if any, reward.

Today, of course, Israel occupies the ‘shorthand for right-on’ role vacated by South Africa. And, it follows, if you want to be taken seriously as a ‘serious’ artist by the left/liberal establishment, you have to document suffering, and who suffers more than [insert Latest Leftwing Obsession]? Naturally, today the L.L.O. is “Israel”. Once again the wannabe ‘serious artist’ has a collection of prefab cliches and images to establish their credentials as a great thinker without the intervening inconvenience of actually having to think very much.

Certainly, the ersatz thinker will not have to dwell very much on the fact that Israel isn’t South Africa and the occupation of land (belonging to one’s enemies) while repelling a genocidal war of destruction – started by one’s enemies) isn’t ‘apartheid’.