I can, albeit with some muttering, accept poppy-burning in the name of free speech, but this latest stunt organised by Anjem Choudary is a step too far. One is tempted to call it a ‘stunt’, but really it is more than that. A stunt suggests a handful of people doing something outrageous to provoke public fury, but this latest episode involved hundreds and this gives a clue as to size of Choudary’s growing supporter-base.

Yes, hundreds of Muslim fundamentalists have marched this weekend on the US Embassy in London to protest the killing of Osama Bin Laden. They have also released a video inciting the murder  of Prince Harry to “avenge the death” of Bin Laden. 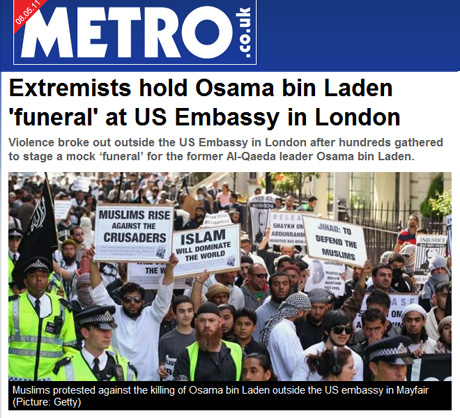 It isn’t enough for our government, police and public to shake an impotent fist in outrage. But that appears to be all we have done.

It is time we stopped messing about as if so-called “Muslims Against Crusades” and their supporters were no more eccentric and harmless than an “The End is Nigh” evangelist with a sandwich board annoying shoppers. If the organisers of this demonstration are not preparing people to support or undertake acts of terror against this country, I’d like to know by what means this could be achieved more effectively.

People will say this would be a ‘hysterical’ response. However, if supporters of a militant fascist organisation – particularly one responsible for bloody terrorist atrocities around the world – marched in London we would not be so calm about it.

I repeat: the idea that the organisation that grew out of  Al Muhajiroun and its various guises is a harmless bunch of fringe nutters is rapidly appearing to be wishful thinking. Fringe nutters cannot organise a mass demonstration. With each demonstration, Choudary’s group generates lighting-rod publicity. More ‘nutters’ flock to his cause.

He has now gone too far and it is time for the authorities to deal with him.

What’s more, it is an outrage that London appears to be the only western Capital to host such a demonstration – a demonstration that also seems to be tolerated. It does not make British people – Londoners in particular – very safe. It makes London a western haven for murderous lunatics.

It is significant too that this demonstration occurred as the inquest into the 7/7 bombings concluded. The inquiry criticised our security services for not being prepared and for several operational failures. This is not entirely fair. Prior to the 7/7 attacks, anyone who warned that such an attack was imminent would have been dismissed as a hysteric. A crank. An alarmist. An Islamophobe. Even a racist.

It is time we stopped being so childish and naive. It’s time we took this threat seriously.