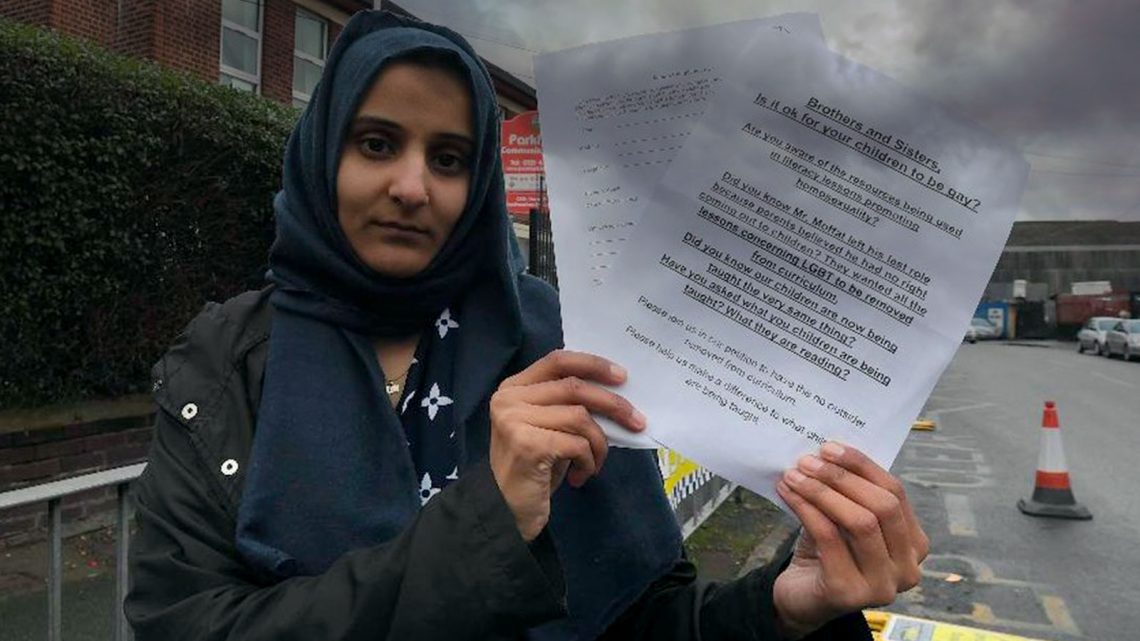 Last week I received some criticism for daring to discuss the reasons why many might fear Islam. Some felt it was an overreaction to link the Sharia-sanctioned judicial murder of gay people in almost a dozen Muslim-majority countries, most lately Brunei, with the Section 28-style demands of protesting Muslim parents in Birmingham (which is now spreading to other cities).

Was it “fair” to link the motives of those who impose cruel Sharia-law punishments on lesbian and gay people in Islamic countries with the actions of the Birmingham parents who are merely “religiously conservative”?  Well, I’m not sure I was saying anything as bluntly as that, though given the polls I referred to one has to wonder what sort of society these parents might wish to create if they had the numbers, or were unconstrained by the consequences of not obeying secular law in a Western country. It stands to reason that laws are made by people – they are not imposed on us like the weather, or the laws of physics. It is people with beliefs and opinions – and demands – who create societies, which give rise to the structures which create the laws. People are responsible for those laws.

But before I could grapple with the metaphysical questions, news came in which short-circuited the need for deeper theoretical analysis. An article in The Observer identified one of the leaders playing a “key role” in the Muslim-led homophobic campaign to stop LGBT-inclusive lessons as a Dr Kate Godfrey-Faussett – a psychologist, no less – who heads up an organisation called StopRSE, which has been investigated by the National Secular Society.

The StopRSE organisation promoted the DEATH PENALTY for homosexuality.

From The Observer article:

In a letter dated 18 February, seen by the Observer, the society warned the council that the Stop RSE campaign had “promoted material which says the punishment for homosexuality is death. Our research has found that downloadable resources which were available on Stop RSE’s website as recently as last week [since withdrawn] included a book which endorses lashing and killing gay people.”

Can you imagine any other group getting away with this?

It is almost certain that if members of a far right group were found to have distributed literature arguing that Muslims should be killed, they’d be jailed under terrorism and racial hatred legislation, but this woman and her group aren’t. Why?

Here is an extract from a book shared as a resource by the anti-LGBT inclusion campaigners. It is called “Marriage and Morals in Islam“. This is being distributed in the UK, not Brunei.

So we see that as far as the Qur’an is concerned, homosexuality is an “indecency,” and that Allah had destroyed a whole nation because of this indecent sexual behavior.

In the Islamic legal system, homosexuality is a punishable crime against the laws of God. In the case of homosexuality between two males, the active partner is to be lashed a hundred times if he is unmarried and killed if he is married; whereas the passive partner is to be killed regardless of his marital status. In the case of two females (i.e., lesbianism), the sinners are to be lashed a hundred times if they are unmarried and stoned to death if they are married. (See the chapter on “hudud” in Sharaya and Shark Lum’a also al-Khu’i, Takmilah, p. 42-44.

Why is Islam so severe in matters of fornication, homosexuality and lesbianism? If the Islamic system had not allowed the gratification of the sexual urge by lawful means (without even associating guilt with it), then it would be right to say that Islam is very severe. But since it has allowed the fulfillment of sexual instincts by lawful means, it is not prepared to tolerate any perverted behavior.

The homosexuals are considered as the high risk group for Acquired Immune Deficiency Syndrome (AIDS). This shows that nature has not accepted it as a normal sexual behavior among mankind. The homosexuals are told that in order to have safe sex, they must use condoms. If homosexuality without condoms is not safe sex, then how can it be natural? Isn’t the statement that “it is natural but not safe” a contradiction in itself?

The moral bankruptcy of the West is clearly evident in the present trend where some Christian churches are willing to consider modifying the Biblical moral values to accommodate the whims of those who want to justify their immoral behavior!

You will notice that it specifically condemns “The West” and mainstream Christian churches for their departure from “Biblical moral values” and accommodating lesbians and gays instead of killing them. You will notice that this is not just quoting dead scripture for scholarly purposes, but situating it as relevant in a modern social and political context.

Talking to gay friends it is not hard to see why they’re concerned. Material is being produced and distributed and it is similar to that touted by the late crank Rev Fred Phelps of the cultish Westbro Baptist Church. But instead of being roundly condemned and mocked, it is being taken seriously. Indeed, BBC Question Time even posed the question: “Is it morally right from 5 year old children learn about LGBT issues in schools?”

Morally right? To learn that gay people exist? In a world where some of those 5 year olds might have gay parents, or a gay older sibling, or other gay relatives, or their parents may have gay friends? Or their neighbours might be gay? How is this a “moral issue” any longer? Is the very existence of gay people meant to be kept a secret?

Sure, I accept that some religious institutions – Jewish, Christian, and other – might take this approach, but the neutral, secular, BBC? It is hard to believe that other than out of the deference nice liberal people extend to Islam the question would have been asked at all, let alone in this way.

The head of ‘Tell Mama‘ an anti-Islamophobia campaigning group, Fiyaz Mughal, wrote an op-ed for The Independent warning the Muslim parents that they can’t have it both ways. “If we’re defended against bigotry, so must the LGBT+ community,” he wrote. That was three months ago. No one has listened. On the contrary, in the weeks that followed, the protests gained momentum. They spread. The “be tolerant of others so that you may also benefit from tolerance” argument has not succeeded.

In his article he described as ‘archaic’ the view put forward by one of the Muslim parents: “Children are being told it’s okay to be gay, yet 98 per cent of children at this school are Muslim. It’s a Muslim community.” Treating the Muslim community like a monolithic bloc is what nice liberal people like us are not supposed to do. So what are we supposed to do when it turns out that we are out of step, and liberal Muslims like Fiyaz Mughal is out of step with a strident community voice saying the exact opposite?

I would have preferred to write the moderate piece Mughal wrote, but he has already written it, months have passed, it made no appreciable impression at all, so what is the point of writing another along the same lines?

The problem with liberals is that we lie as much as our enemies lie. The only difference is that we chiefly lie to ourselves. We want the quid pro quo of inter-minority tolerance to be true because we want that world to be true. Perhaps it isn’t. Perhaps it never will be. Consider this: Thirteen years ago Peter Tatchell drew attention to the fact that Islamists with “kill the gays” views were welcome in Left-wing organisations. Nothing was done about the willingness to turn a blind eye towards Islamic homophobia then, and it appears nothing is being done about it now.

Just look at the confused language of the SWP’s position on the issue. Its primary concern seems to be that the “Islamophobic Prevent strategy” is not brought to bear on this extremism. They say that this “pits LGBT+ and Muslim people against one another and undermines the possibility of open discussion in schools.” Platitudes aren’t going to help.  I fear that this is an irreconcilable difference between the lesbian and gay community and the Muslim community and Liberals are going to have to choose whether they support a regressive, homophobic and patriarchal religion which will not budge, or modern Western liberal democracy.

The hardest choice, of course, will have to be made by liberals who are Muslims, and lesbians and gays who are Muslim (whether they are liberal or not). But the tragedy is that we have not been able to build successful institutions to give reformist Muslims an authoritative voice in this country. At the same time the failure to stand unequivocally against problematic stances of Islamism have left a gap open for the far-right. So the problem becomes that those who hate Muslims as a whole rarely care about gay Muslims, specifically; and those who stand in solidarity against anti-Muslim bigotry rarely also speak up against religiously sanctioned homophobia. Worse, the liberal/left tries to shut up even ex-Muslims from talking about the faith they’ve abandoned. So we’re at an impasse, and we do not have the political infrastructure to deal with it. This is why we have come to a point where this invidious choice even has to be contemplated.

Paralyzed by this, many liberals will not want to choose, and that is why my gay friends don’t trust them. Would you if your rights, your dignity – and in extreme cases – your very life – depended on it?

What’s to be done? Who the hell knows! But arresting and prosecuting members of organisations that promote killing gay people might be a start.