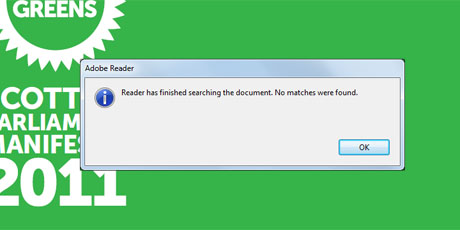 It really is the only conclusion you can come to. Despite there being a lot of good people in the Greens, if you’re a neo-Nazi who hates Jews it probably is the party for you.

Certainly, several Green nutters have been exposed by this blog in the past.

But what of the image above? Well, that’s the message you get if you search the  Scottish Green Party’s newly published manifesto for any mention of foreign countries involved in conflicts or known abusers of human rights.

Of course, if you search for “Israel” you come up trumps!

This is what they say in their section marked “An internationalist Scotland”:

Our Green vision for Europe seeks to replace the economics of unsustainable growth and free trade dominated by capital markets with the ecological alternative of local self reliance and resource conservation, within a context of wider diversity and social inclusion.

The European Union must therefore be based on the principle of mutual co-operation and must serve the needs of people, not multinational corporations. The European Union can also do more to support emerging democracies, including across North Africa and the Middle East, by offering preferential trade deals. We will also work towards the elimination of the arms export industry, starting with an end to export to dictatorships.

Global injustice and war lead to people coming to Scotland as asylum seekers and refugees. Scotland must welcome those fleeing persecution in their own countries, while working to tackle the forces that persecute people.

We’ll deliver devolved services that take the rights and needs of asylum seekers and refugees seriously, as well as putting pressure on the UK Government to provide a genuinely humane asylum system.

We’ll support moves to build a coalition of countries and regions willing to adopt a policy of boycotts, disinvestment and sanctions in relation to the Israeli Government to encourage an end to illegal settlements and negotiations on a final status for a Palestinian state. Some aspects of this can be taken forward immediately in Scotland through public procurement measures which are already under devolved control.

Israel, the only country in the world the Greens think it is worth mentioning in their political manifesto.

Only an obsessive Jew-hater could produce this.

If you’re a well-meaning and anti-racist member of the Green party, you’ve got into bed with neo-Nazis. You’d better change the sheets before it’s too late.

Gene adds: Israel has an active Green party, whose chairman is the deputy mayor of Tel Aviv. When the US Green party supported BDS, the Israeli Greens issued this statement.

Libby T adds: The BNP like to highlight crimes and convictions involving black people. This is quite rightly and reasonably considered further evidence that the BNP is a racist party. No one would accept as a defence the suggestion that they’re “anti-crime” not “anti-black”. It may certainly be a fact that the black people they report on are indeed criminals, but that is not the point. The point is that they selectively report on crime, and with a singular focus, insinuating that the worst crimes are almost exclusively committed by black people and that addressing black criminality is a top priority. This is clearly racist.