Although you didn’t know about it, an East London Gay Pride took place last weekend in Tower Hamlets:

Saturday’s small event, billed as an ‘East End Gay Pride Gathering and March’, was organised by web consultant Joseph Newman-Saunders, who defended his decision not to publicise it.

He said he had spread the word about the event on Facebook groups and that it was “not about publicity”.

Mr Newman-Saunders, who said that 30 people joined the march, said: “It wasn’t about religion or getting press attention.”

He added: “This event is a clear signal that LGBT people are very proud to be part of the rich and diverse communities of London’s East End.

“I hope this peaceful, non-political and non-religious initiative provokes a much-needed debate about how we can build a tolerant, cohesive society in which everyone can live together without discrimination or intimidation.”

The march was heavily policed:

Twenty-one police officers were posted to the small event, while a police helicopter hovered above.

Marchers said they received some anti-gay abuse from drivers, although the event was generally peaceful.

Only a bigot would claim that all Muslims are homophobes, and only a fool would argue that that all homophobia is Muslim. It wasn’t Muslims who killed Ian Baynham, while screaming “fucking faggots“. However, it is undeniably the case that the response to the “Gay Free Zone” stickers, bearing a Quranic injunction, has been hamstrung by what Sarah AB neatly describes as the attempt to “triangulate” a “correct” position. I think that the triangulation, so far, has got the balance wrong. Certainly, is important to ensure that individuals connected not only to the EDL, but also to the more extreme Stop the Islamisation of Europe, do not end up running gay pride events. However, it is also important to recognise that there is a strain of homophobia in the East End of London which is actively promulgated by Islamist institutions, political groups and hate preachers.

It is laudable that people are concerned about a potential generalised anti-Muslim backlash. However, we should also be aware that supporters of Islamist political institutions and hate preachers are actively and cynically exploiting this fair minded response, in order to protect their guys from criticism.

Take, for example, the throw-away line in the first report on the “Gay Free Zone” posters, that it was possible that the EDL might have put the Gay Free Zone posters, in order to provoke hatred against Muslims. In the very early days of the poster affair, before an investigation had taken place, this was a possibility. However, long after it became clear that an Islamist group was behind the homophobic posters, the “EDL False Flag” conspiracy continued to be peddled, usually by supporters of Islamist groups.

Here’s another example. A gay councillor was the subject of persistent homophobic heckling by supporters of Mayor Lutfur Rahman. I know this to be true – I’ve spoken to the councillor myself. However RESPECT called the allegations lies, and attacked councillors who reported the homophobic abuse for spreading an “anti Muslim slur”. Andy Newman, a Labour party member, lined right up behind this homophobic bullying campaign:

If it is true that Councillor Lynch has made false allegations, then she is playing a dangerous game in seeking to stoke up antagonisms in the borough. Homophobia is far too serious an issue to be used as a political football.

It is very clear what is happening here, isn’t it? Supporters of Islamist politics are using false claims of racism to silence concern about Homophobia. 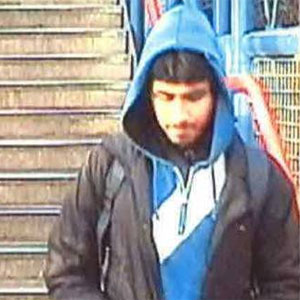 So, who is to blame for the East End’s homophobia problem?

What we can say, with certainty, is that the East London Mosque and the London Muslim Centre have been enthusiastic hosters of homophobic hate preachers, over the years. In particular, we know that the ELM/LMC hosted Abdul Karin Hattin’s “Spot the Fag” event: 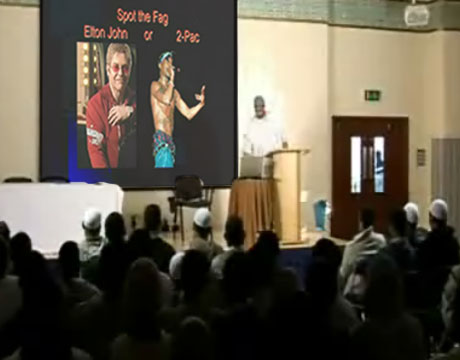 The East London Mosque, of course, has put out a statement in which they said ““We stand together with our fellow citizens against all forms of hatred, including homophobia”. Brave words. But when it comes to actually banning hate preachers, it is a very different story.

Earlier this month, the London Muslim Centre hosted an event by the extremist Tayyibun Institute. 1,500 attended the event. One of the advertised speakers was Abdul-Rahman Al-Barrak who has called for the killing of supporters of “gender mixing” , and of writers who argue against calling non-Sunni Muslims “unbelievers” or “kafirs”. An event featuring a speaker such as Al-Barrak should not take place at all. A group which invites a speaker such as Al-Barrak should not be allowed to use the facilities of the London Muslim Centre at all. However, despite widespread public concern, the meeting went ahead, with Al Barrak in attendance by video link: although he did not deliver a lecture through “lack of time”.

The East London Mosque is playing the system. That’s because, over the last five years, the East London Mosque has received public sector funding totalling £2.6 million. They’re keen not to lose that money. Therefore, they make the “right noises”. They put out press releases condemning homophobia in generalised terms. They show videos called “No Place For Hate“. Anonymous posters linked to the East London Mosque occasionally turn up in HP comment threads to claim that particular speakers have been banned: although no public statement to that effect is ever made by the institution.

But, behind the scenes, it is clear that their response is largely for show. Those who have met with the London Muslim Centre hierarchy say that the standard response is stress the right of preachers to express the view that homosexual conduct is sinful. That argument is misdirection. The hate preachers the East London Mosque hosts don’t simply say that homosexuality is a sin: they say that Muslims should hate homosexuals and homosexuality, and that in a just Islamic state – which ought to be created – gays will be executed. In the interim, some argue, gays should be attacked.

The East London Mosque also argues that certain of the hate preachers which they have hosted have revised their views and mellowed through argument and interaction. Similarly, bollocks. What has happened is that Harry’s Place has transcribed the vicious and violent incitement contained in the lectures of these hate preachers. In response to being caught read handed, some hate preachers have put out statements claiming that they’ve been quoted “out of context”, excusing their inciteful rhetoric, and stressing that homosexuals should, in fact, only ever be executed in an Islamic state, following full due process.  This, then, is presented as evidence of rehabilitation. It is actually evidence of spin.

This is sleight of hand. The East London Mosque wants to continue to host hate preachers, and the organisations which support and endorse hate preachers. They also want to keep their huge public subsidy. Therefore, they’re prepared to do what is necessary to preserve both.

It is just unacceptable that a tiny gay pride march in Tower Hamlets should need to be carried out in near-secrecy, and that is should require as many police to protect it, as attendees on that march. It is unacceptable that the East London Mosque should continue to host extremist preachers, while in receipt of public funds.

If they won’t do that, I don’t see why they should have a penny of public money. Do you?

That’s the way to fight homophobia. Not by generalised mutterings about “the Muslims”: but by concrete and effective steps to ensure that there is no venue for the promotion of anti-Gay bigotry in Tower Hamlets.