On the streets of London, some Libyans demanding freedom for their country are quick to spot a local problem. This is what happened to deluded idiots from the extremist party Hizb ut-Tahrir when they tried to join a demonstration:

At around 4.30pm a group of Hizb ut-Tahir supporters had arrived waving black flags and began chanting. At this, the Libyans used the sticks which previously held banners as a makeshift barrier in an attempt to separate that group from the rest of the main protest. One of the Libyan organisers called the police and demanded that the steel barriers should be re-configured so as to separate Hizb ut-Tahir group from the others in the protest.

“They are not welcome” a man shouted to me about the newcomers, “They have nothing to do with us, they are for themselves”

One of the protesters with the Hizb ut-Tahir group told me, “We are for the removal of Gaddafi, but in his place we want an Islamic system”

I pressed him further by asking what about the Libyan call for democracy.

“We don’t want democracy” he answered.

Many of the Libyans were angered by the appearance of the Hizb ut-Tahir supporters and demanded that the press knew that they were unwelcome at their protest. 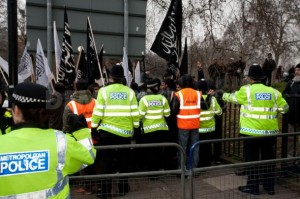 Remember that Egyptian demonstrators also rejected Hizbi interlopers at one of their London demonstrations in January.

Unfortunately some other London Muslims are quite happy to work with Hizb ut-Tahrir.

One of them is Mohamed Ali Harrath, the CEO of the Islam Channel and a director of iEngage, the Islamist agitation outfit that has been supported by some Labour and Liberal Democrat MPs and Peter Bottomley MP too, even though his fellow Tories have shown more sense.

Here is Harrath at a Hizb meeting in London last Saturday. He’s the man on the left. I wish he were looking down in shame, but sadly he isn’t. The man in the middle is Massoud Shadjareh, the head of the self-styled Islamic Human Rights Commission, a band of ugly Khomeinists. On the right is Jamal Hardwood of Hizb. 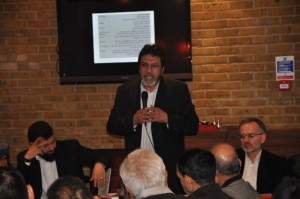 According to Hizb, Harrath was in ridiculous fear-mongering mode:

Massoud Shadjareh argued that subjugation of the Muslim community occurs when we allow our minds to be enslaved, and Mohamed Ali talked about Europe’s terrible history towards minorities, and that that Muslims needed to fear their Islamic beliefs and valued being wiped out from Britain (others argued strongly that this was a greater fear than any physical threat) and that it was important to view Islam as a complete way of life.

Will the fools in Parliament who still support iEngage change their minds if they learn that Harrath is happy to work with a virulently antisemitic party that opposes democracy, wants to get its hands on Pakistan’s nuclear weapons to “strike fear” into India and America, and has called for Arab armies to stage military coups and then proceed to annihilate Israel?

Will they finally get it and announce that iEngage has no formally recognised role to play in the politics of this country?

But foolishness has so much currency in Britain right now that I am not very optimistic.

Still, a pleasant surprise would be very nice and is not impossible.