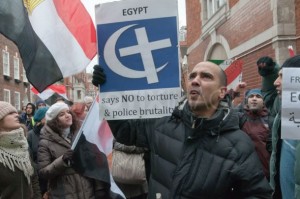 On Saturday the extremist party Hizb ut-Tahrir tried to muscle into a demonstration against Mubarak at the Egyptian embassy in London.

The demonstration’s organisers were having none of it:

Hundreds protested outside Egypt’s embassy in London on Saturday calling for President Hosni Mubarak to go, but differences in message highlighted tensions between Islamists and others over the country’s future.

Islamists in one demonstration wanted an Islamic government and Islamic law to replace Mubarak’s 30-year autocratic rule, around the corner was a secular protest.
…
“Mubarak out, Islam in,” and “Allah take Mubarak the pharaoh,” chanted Islamist protesters, including organisers Hizb ut Tahrir, a hardline Islamist group. Women and men in the group protested separately.

Nearby, other demonstrators were careful to distinguish themselves from the Islamists, sticking to secular chants

“We’re completely unrelated to that demonstration … It feeds into Western fears on how it would affect their interests, and that’s the excuse the Egyptian government is using to avoid change,” said protest organiser Rafik Bedair, 36.

This is from another report on the demonstration:

Hizb Ut-Tahrir Britain arrived to take part in an emergency picket at the Egyptian Embassy, but there they met a group of Egyptians “from different political & ideological backgrounds” had already planned to hold a peaceful protest to “show solidarity & support of our fellow Egyptians in our beloved country” who have been protesting in Egypt since Tuesday. Hizb Ut-Tahrir were apparently told very firmly that the embassy protest – like the Egyptian revolution – was to be entirely non-sectarian and that they were not welcome there.

So Hizb ut-Tahrir were forced instead to hold their own separate demonstration around a hundred yards away around the corner along South Audley St, where they were spread out along the pavement between South Street and Hill Street. As always at their events, everyone was dressed in black and the men and women were segregated. The men filled most of the pavement along South Audley St, with just a few women at one end, with most of them around the corner eastwards on South Street, away from the loudspeakers and the embassy. It seemed a clear demonstration of the lack of equality they would like to impose.

Here they are. What a sad and drab lot. 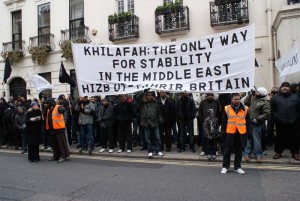 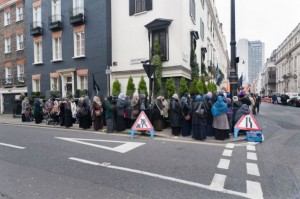 It would be wonderful if the people at Friends House London who regularly host Hizb ut-Tahrir, knowing full well that they are nasty extremists and antisemites, would decide instead to stand with the Egyptians – and so many others – who reject them.

Instead this weekend’s Hizb rally at Friends House went ahead as planned.