Cross-posted from For a democratic secular Iran

When Majid Jamali Fashi was paraded on Iranian TV as the Mossad agent who had assassinated Iranian physicist Massoud Ali-Mohammadi, it wasn’t so much his calm demeanour that prompted questions in my mind but something he said that didn’t sound right. Majid Jamali talked about landing at Tel Aviv airport and the visa officer at the airport, who only spoke Hebrew, started giving him problems until the Israeli officer in charge of the operation, waiting in the queue behind him,  stepped forward, showed his ID card, sorted out the misunderstanding and took him through.

First question that came to my mind was, if someone was recruited to carry out such an operation, would they go through the normal visa channels in the airport? and even if yes, wouldn’t the officer in charge, go up to the visa desk first and explain what is going on, then ask the recruit to come forward? Also  where in the world, apart from in Dulles Airport, Washington, do Visa officers at the airports not speak some English?

With these questions in mind, more information about who Majid Jamali Fashi is, has come about. Pictures of him taking part in a kick-boxing tournament in Australia in July, 2010 appeared. He is seen in this picture standing outside the ring with a camera, while the other member of IRI kick boxing team, Ashkan Tahmasebi, draped in an Islamic Republic flag, is waiting to start his bout. 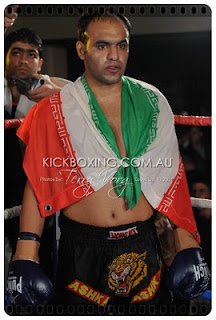 Just to make it 100% certain that it is him, the tattoo on his left arm gives the game away: 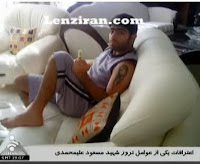 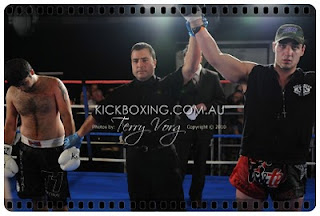 In his televised confessions, Jamali claims to have gone to Israel via Baku, Azerbaijan. Fars News and other martial arts websites on the other hand report he was one of the medal winners during the tournament there in August 2009. People who know Majid Jamali, have claimed he is a die hard Ahamdinejad supporter, who took part in beating up peaceful demonstrators during the widespread street protests by the Green Movement.

There are more questions about the assassination of Iranian physicists too. Just a handful of them:

– Why would such elite units of foreign agencies assassinate two physicists who had nothing to do with the nuclear program? Both Ali-Mohammadi and Shahriari were Iran’s representatives on the SESAME project. A regional research project which even includes Israel as one of the project participants.

– Why were these elite units succeed in eliminating two research physicists but fail so miserably in assassinating Fereydoon Abbassi, who is working on the nuclear program and who has been on the sanctions list and a member of the revolutionary guards?

– Why did these elite units choose to carry out their assassination in such an attention grabbing way in middle of Tehran traffic in broad day light, with a high probability of getting caught?

– Why was no cctv footage released or appeals made for the witnesses to come forward with information about what the assassins looked like, what their motor bikes were like, etc.? Compare this with the trouble the intelligence ministry goes to when they want to identify someone who has taken part in a peaceful demonstration.

– What did the reported encounter between the former Iranian Science Minister and his Israeli counterpart during the SESAME project conference in Jordan, while the two assassinated Iranian physicists were there, have to do with these assassinations? Did the physicists come across something they should not have?

Most important of all, why are no Western media asking any of these questions and just repeating what the official IRI line is? Are the Western intelligence agencies and Israeli intelligence agencies actually enjoying these stories, because it makes them look more powerful than they really are? Is it actually to the benefit of the Israeli hardliners to have a hardline Iran uttering hardline rhetoric?