In the past I’ve ridiculed a subset of American liberals and Democrats for an annoying tendency to threaten to leave the country– most often for Canada– if things don’t go their way politically. In the end, they rarely do. And at least some liberals have a sense of humor about it:

But there’s a corresponding (and much more disturbing) phenomenon on the conservative side, which seems to be moving from the Right’s extreme wing closer to its mainstream.

Republican Congressman Zach Wamp of Tennessee, who is a candidate for governor in the state’s GOP primary, said that if the federal health care reform law passed by Congress this year isn’t repealed, states will have to consider breaking away from the US.

“I hope that the American people will go to the ballot box in 2010 and 2012 so that states are not forced to consider separation from this government,” said Wamp, who has also promised to refuse to implement the law at the state level if he is elected, in an interview with the Hotline.

Wamp also praised Gov. Rick Perry (R-TX) — who has also floated the idea of secession — for leading the fight against the health care bill. “Patriots like Rick Perry have talked about these issues because the federal government is putting us in an untenable position at the state level,” said Wamp.

“We’ve got a great union. There’s absolutely no reason to dissolve it. But if Washington continues to thumb its nose at the American people, you know, who knows what might come out of that.”

A day later, he sought to elaborate. He said that Texans “are fed up with what’s coming out of Washington,” and therefore they’ve been inspired to “debate” certain questions among themselves, notably “can we secede.” And just to clarify his remarks further, a gubernatorial spokeswoman said that Perry indeed believes Texas can secede if it so chooses.

(There is a tiny fringe of leftwing secessionists in Vermont, although I’m unaware of any elected Democratic politicians advocating secession in recent decades. They have found common cause with some neo-Confederate seccesionists in the South.)

Now Perry and Wamp may have just been blowing off steam. But threats of secession by elected politicians, no matter how intended, are hardly harmless.

You may have heard about the dust-up that occurred the last time states tried to secede from the Union. 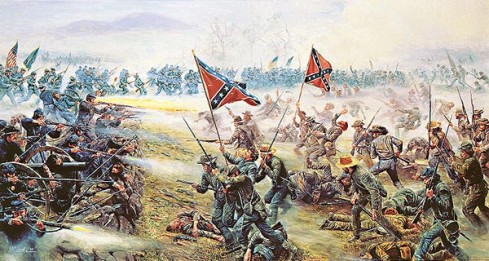 Fortunately Wamp’s opponents in the primary were quick to distance themselves from his lunacy.