John McDonnell has withdrawn as predicted from the Labour Party leadership contest in the last few minutes as he said he would do.

David Miliband has just said via Twitter that he will use his vote to nominate Diane Abbott, which with McDonnell out of the race should ensure that she makes it onto the ballot paper by this afternoon’s deadline. 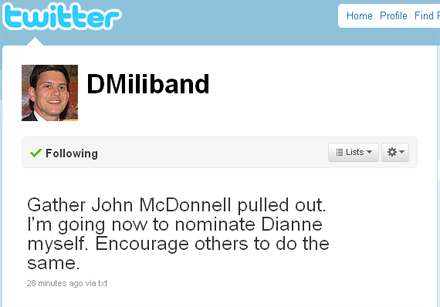 In a statement reported by The Guardian McDonnell said that as he wanted to ensure the presence of a woman on the ballot. He should be congratulated for that.

“Yesterday I wrote to Harriet Harman to urge her to use her position as acting leader in association with the party’s national officers to secure a reduction of the qualifying threshold for candidates to be allowed onto the ballot paper. Regrettably this has not occurred and so I have no other option but to withdraw in the interests of the party.

“I know that many Labour activists and trade unionists will be disappointed that their candidate will not be on the ballot. I am urging them to continue the fight for democracy within the party so that in future leadership elections rank and file members will be represented by the candidate of their choice.”

UPDATE – The Labour Party has confirmed that Diane Abbott has made it on to the ballot paper as has Andy Burnham setting up a five way contest.

Some people are calling Abbott’s victory tokenism, but I couldn’t disagree more. Among those who nominated her included Dennis Skinner, Stephen Twigg, Phil Woolas and Keith Vaz as well as Miliband.

An MP from within her camp put it like this: “This is a historic moment less because she is a woman and more because she is the first black contender for the leadership”.

The final count gave Abbott, Burnham and Ed Balls 33 votes each with Ed Miliband on 63 and David Miliband on 81. Shame about McDonnell, but as the rules stand he comes out of this very well. He’s been a credit to the party as has been Miliband whose supporters helped to get Abbott onto the ballot.

Cath Elliot has posted this on CiF and her comments are worth echoing here on why it is important that Abbott is on the ballot paper and why it doesn’t matter how she got there.

“…the overwhelming view seeming to be that if Abbott managed to get the 33 nominations she needed thanks to the special efforts of Miliband and others on her behalf, her subsequent candidature for the Labour party leadership would be nothing more than tokenism, and an insult to black people/women/lefties/insert-minority-of-choice everywhere.”

Well, unsurprisingly, I beg to differ. Because what’s actually insulting is being presented with the same lack of choice…So I’m glad Abbott is now in the leadership race, and I really don’t care if it was tokenism or special measures or positive discrimination or patronage that got her there. What’s important is that she’s there, and that for the first time ever in British history, a black woman has made it on to the leadership ballot of a major political party. It’s still not enough, of course: but at least it’s a start.”