Here’s part of the Islamic Forum of Europe (IFE) fightback against what they call “media slurs”: a new Youtube channel. This is the first video.

Here he is on the right with preacher and Hitler fan Yusuf al Qaradawi and representatives of Neturei Karta, Islamists’ favourite Jewish fig leaves. 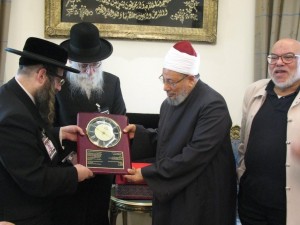 Here he is again from 0:45, telling off Egypt for not doing enough for jihad. His interviewer is Press TV ultra-loyalist Roshan Muhammed Salih.

He is Kamal Al Helbawy, a Muslim Brotherhood leader whom Gene wrote about in 2008 when Helbawy had this to say to the BBC Arabic service:

Dr. Kamal Al-Hilbawi: I condemn the targeting of any civilian, but incidentally, I believe that every Israeli civilian is a future soldier.

Interviewer: He is what?

Interviewer: Even if he is two years old?

Dr. Kamal Al-Hilbawi: A child born in Israel is raised on the belief that [the Arabs] are like contemptible sheep, and that this is a land without a people, and they are a people without a land. They have very strange concepts. In elementary school, they pose the following math problem: “In your village, there are 100 Arabs. If you killed 40, how many Arabs would be left for you to kill?” This is taught in the Israeli curriculum. What would you say about that? Should a child studying this be considered a civilian? He is a future soldier.

Now there’s a poster boy for the IFE.