This is slightly painful for me to write.

Hedy Epstein, an 85-year-old Jewish refugee from Nazi Germany, recently became an icon of the Free Gaza Movement and Viva Palestina when she flew from the US to Cairo and began a hunger strike after Egyptian authorities initially blocked a “solidarity march” into Gaza.

Ms. Epstein is routinely referred to by new-found admirers like Seumas Milne as a “Holocaust survivor,” as if this lends her extra credibility. I don’t know if this is how she describes herself. But it is a cynical misuse of the phrase.

Ms. Epstein was born in Germany in 1924 and left the country for England in 1939 as part of the Kindertransport to England. Her parents and most of her family in Germany were murdered in the Holocaust. Clearly her experience was harrowing and heartbreaking.

Why is this painful for me? I knew Hedy Epstein slightly when I lived in St. Louis, Missouri, in the 1980s. We had a mutual friend, and were both regular guests at our friend’s Passover seders. I remember her as a dignified and decent woman with a strong social conscience. I don’t recall any hostility to Israel on her part. It’s sad that she is lending her name to a movement which is so hostile to Israel that it has been warmly received by Hamas leader Ismael Haniyeh in Gaza, who awarded them medals that they proudly displayed. 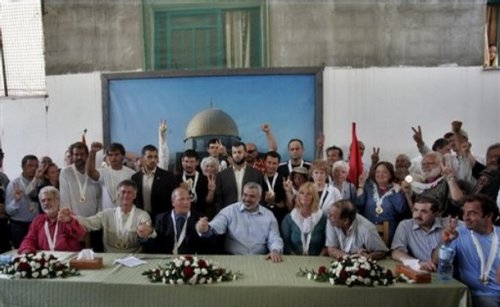 The Free Gaza Movement website leave no doubt whose side it is on:

Speaking for all Palestinians, Hamas Prime Minister Ismail Haniyeh accused Abbas of having “justified” [Operation Cast Lead], and added that his decision “cannot be seen as a conciliatory act. (It reflected an attitude that) would perpetuate internal conflict” and continued Israeli oppression. More than ever, Abbas exposed himself as an imperial tool on the side of the dark forces that perpetuate occupation and conflict and deny his people redress, justice, and the freedom they deserve.

It’s sad that Hedy Epstein is allowing herself to be used as a symbol by those like Milne, George Galloway and others who would be happy to see Israel– home for about half of the world’s Jews– disappear from the map.

Also distressing is that Ms. Epstein sits on the advisory board of the anti-Zionist group Deir Yassin Remembered, which is led by Holocaust deniers Daniel McGowan and Paul Eisen, both staunch defenders of imprisoned Hitler-lover and Holocaust denier Ernst Zundel (McGowan visited Zundel in prison). The Jew-hating Israel Shamir is a former board member. For this, Deir Yassin Remembered has been denounced even by anti-Zionists like Tony Greenstein and Sue Blackwell. Does Hedy Epstein know? Or care?

When I lived in Israel, I would sometimes see real Holocaust survivors on the buses, with their concentration camp numbers– somewhat faded but still visible– tattooed on their forearms. It’s deeply disturbing that Ms. Epstein– out of what I can only hope are misguided but decent motives– is in effect lending her support to a movement which only a few years ago was pleased to blow up those buses and everyone on them.