Stupid violence is something no one should be surprised to find associated with a Viva Palestina convoy.

From IHH, the Turkish Islamist group that has partnered with Viva Palestina in the service of Hamas:

The activists in the Palestine convoy started a protest after Egyptian authorities attempted to confiscate 57 vehicles belonging to American members of the convoy. The 500 protesters broke the port gates and set up a barricade with two trailers. Hundreds of Egyptian riot police sealed off the port. 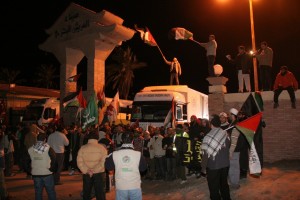 Here are convoy participants and policemen throwing sand and projectiles at each other in El Arish.

In Rafah, Hamas pitched in. An Egyptian soldier paid for this stupid violence with his life.

JERUSALEM — An anti-Egypt rally in southern Gaza turned deadly on Wednesday when demonstrators rushed the border fence and stoned Egyptian troops on the other side, leading to an exchange of gunfire and the death of an Egyptian soldier. Nine Egyptian soldiers and a dozen Palestinians were wounded from stones and gunfire, witnesses and medics said.
…
The demonstration, organized by Hamas, protested Egypt’s refusal to allow international aid and solidarity missions into Gaza as well as Egypt’s construction of an underground barrier to obstruct smuggler tunnels. Those tunnels supply both goods and arms to Hamas and Gaza.

As Hamas leaders gave speeches on Wednesday, young men climbed the border fence and threw rocks at the Egyptians, witnesses and the police reported. Palestinian police officers shot in the air to control the crowd, though to little avail.

The convoy has now entered Gaza. Hamas leader Ismail Haniyeh has held a ceremony to welcome it. Here we go again. 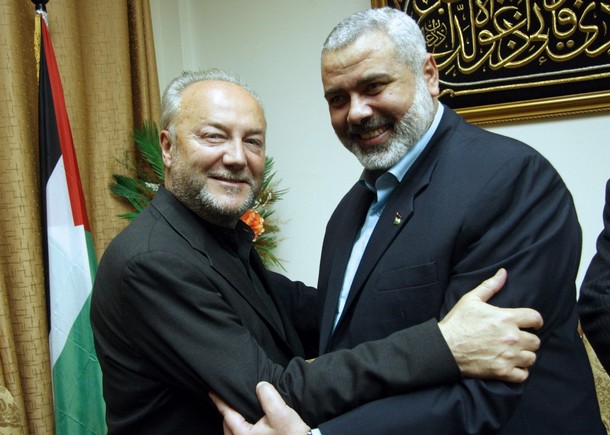 In Haaretz, Amira Hass has penned a biting critique of the authoritarian Egyptian security response to self-styled pro-Palestinian activists in the region at the moment. She also writes this about some of the activists’ time in Gaza:

At midnight, about 12 hours after leaving Cairo, we arrived at a hotel in Gaza. There the first surprise awaited us: A Hamas security official in civilian dress swooped down on a friend who had come to pick me up for a visit, announcing that guests could not stay in private homes.

The story gradually became clear. The international organizers of the march coordinated it with civil society, various non-governmental organizations, which were also supposed to involve the Popular Committee to Break the Siege, a semi-official organization affiliated with Hamas. Many European activists have long-standing connections with left-wing organizations in the Gaza Strip. Those organizations, especially the relatively large Popular Front, had organized lodging for several hundred guests in private homes. When the Hamas government heard this, it prohibited the move. “For security reasons.” What else?

Also “for security reasons,” apparently, on Thursday morning, the activists discovered a cordon of stern-faced, tough Hamas security men blocking them from leaving the hotel (which is owned by Hamas). The security officials accompanied the activists as they visited homes and organizations.

During the march itself, when Gazans watching from the sidelines tried to speak with the visitors, the stern-faced security men blocked them. “They didn’t want us to speak to ordinary people,” one woman concluded.

The march was not what the organizers had dreamed of during the nine months of preparation. The day before the trip to Gaza, they already knew that the non-governmental organizations had backed out. Some people said that Hamas government representatives had found the NGOs did not have a clear, organized plan for the guests and therefore had taken the initiative. One Palestinian activist insisted: “When we heard there would only be 100, we canceled everything.”

Another said, “From the outset, Hamas set conditions: No more than 5,000 marchers, no approaching the wall and the fence, how to make speeches, how long the speeches should be, who will make speeches. In short, Hamas hijacked the initiative from us and we gave in.”

Hamas, or its Popular Committee, brought 200 or 300 marchers. The march turned into nothing more than a ritual, an opportunity for Hamas cabinet ministers to get decent media coverage in the company of Western demonstrators. Especially photogenic were four Americans from the anti-Zionist ultra-Orthodox Jewish group Neturei Karta, who joined the trip only at Al Arish. There were no Palestinian women among the marchers – a slap to the many feminist organizers and participants, both women and men.

After the march, the guests voiced protests to some of the official Palestinian organizers. “We came to demonstrate against the siege, and we found that we ourselves were under siege,” they said. Their variegation and the transparency of their behavior did not suit the military discipline the official hosts tried to impose. The officials listened, and after the reins were loosened a bit, I set out to visit the homes of friends.

There people described the lingering fear from the Israeli onslaught. Saturday afternoon, at 11:30 A.M. – the time of the first aerial bombardments – remains today a sensitive hour for many children. Just as thunderstorms, or electricity failures (an everyday occurrence) or a persistent drone flying above cause anxiety and evoke nightmarish memories.

Some of the marchers were now allowed to go out on their own, with Gazan acquaintances they had previously known only via telephone and e-mail. Some, especially the Arabic-speakers, complained that “a shadow in the shape of a security man” continued to accompany them. In quick “safari” tours of bombed neighborhoods, through bus windows, they saw ruins that had not yet been cleared, like the complex of bombed-out government buildings that are still standing – ugly concrete skeletons with empty rooms and no walls, like screaming mouths.

In meetings without the security men, several activists got the impression that non-Hamas residents live in fear, and are afraid to speak or identify themselves by name. “Now I understand that the call for ‘Freedom for Gaza’ has another meaning,” one young man told me.

The participants spent Thursday and Friday in the Gaza Strip. Friday, January 1, was the 45th anniversary of the establishment of Fatah. The Hamas government does not allow the rival organization to assemble, just as the PA does not allow Hamas to assemble in the West Bank. Hamas leader Ismail Haniyeh congratulated Fatah on its anniversary, but at the same time the Hamas security services did all they could to deter the movement’s activists from even thinking about a celebration.

Hundreds of Fatah activists were summoned by the police and kept in semi-detention for several hours, until evening. Security officials entered homes where candles were burning or Fatah flags were being flown to mark the anniversary. In one home, the security officials tried to arrest two people, and the mother tried to block them. One policeman allegedly hit her – and she had a heart attack and died.

This is the grim and violent regime, which has brought misery and oppression to its people, that Viva Palestina has served.