Supporters of Iran’s Green democracy movement are flocking to the holy city of Qom for the funeral tomorrow of Grand Ayatollah Hossein Ali Montazeri, the leading dissident cleric who has died at the age of 87. Riot police are reported to be taking to the streets of Qom in readiness to prevent the ceremony becoming a flashpoint for further pro-democracy protests. Mr Montazeri was seen as the spiritual father of Iran’s reform movement after he denounced as fraudulent the June presidential elections which returned the hardline incumbent, Mahmoud Ahmadinjad, to power. Mr Montazeri repeatedly accused the country’s ruling Islamic establishment of imposing dictatorship in the name of Islam.

Dictatorship in the name of Islam eh? If the head of Shi’ism worldwide and Ayatollah’s Khomeini’s chosen successor can see the obvious truth about present day Iran, why are certain sections of the British left so slow on the uptake? Watch this space for further developments. The funeral begins at 5:30 a.m UK time. 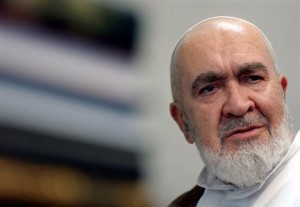 Gene adds: Although the official Iranian media are downplaying Montazeri’s death (Press TV reports only the halfhearted condolences of Ayatollah Khamenei, who approved his house arrest), this could turn out to be a big deal indeed.