Iran’s “re-elected” president Ahmadinejad, in an apparent effort to soften his image, has nominated women to his cabinet for the first time.

“With the 10th presidential election, we have entered a new era … conditions changed completely and the government [make-up] will see major changes,” Ahmadinejad said on state television.

It would be laughable, of course, if brave Iranian women who have stood up to his regime since the phony election in June weren’t being shot, tortured and raped by the same government.

Does anyone doubt that the Islamic Republic’s western apologists will cite this as a sign of progress and positive change?

Here’s one of the women who should be helping to lead Iran– and one day will be. 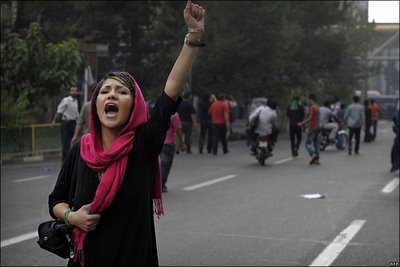