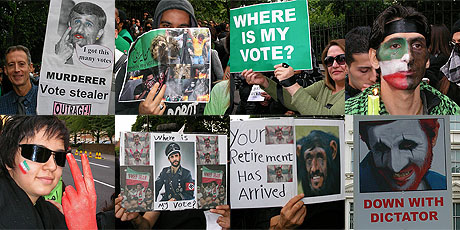 Mahmoud Ahmadinejad has accused his opponents of pandering to “thieves, homosexuals and scumbags” in return for their votes, according to The Guardian.

“At a speech at Columbia University in New York in 2007, the man who claims the Iranian Presidency after the recent disputed election, Mahmoud Ahmadinejad, boasted that there are “no gays” in Iran. Where did all these Iranian gays suddenly come from? The old tyrant has let the cat of the bag. Gay people exist in Iran and they voted against him. Hurrah.”

Peter and some of his OutRage! colleagues also went along to last night’s demo outside the Iranian Embasy in London and sent us the photos above. There are more on OutRage!’s Flickr page. Despite there being no central organiser, more than 600 people – “lots of disparate groups and individuals” – joined the pro-democracy protest.

“We joined the protest to show our solidarity with the heroic freedom struggle of the Iranian people. Although there were a few awkward looks, we received a mostly warm welcome from the predominantly straight Iranian protesters,” he says.