I am, as you know, a strong supporter both of freedom of speech, and the right of states to refuse admittance to those who are not its citizens. Whenever I make this point, and and told that there is a contradiction between these positions, I point out that it is possible nowdays for people in one country to talk to people in another country, with accompanying video image, for free. All one needs to do is to download this piece of software.

George Galloway must read Harry’s Place. He appears to have taken my advice:

George Galloway this morning expressed his disappointment that a Canadian judge refused to grant an injunction to allow him into Canada, but pointed out that the attempt to silence him had spectacularly backfired.“Last night I spoke to almost two thousand people packed into an auditorium in Toronto through the wonders of modern technology,” said George Galloway from New York. “And I will continue to speak to thousands more Canadians over the next few days from the United States.

If Galloway, or Moussawi, or Feiglin have been denied any right at all, it is the right of free movement. There are some who regard this as a fundamental human right, but in Europe at least, it is essentially an economic right: an aspect of free movement of labour. On this basis Geert Wilders is in the best position to object to his treatment. However, if you believe national sovereignty should trump the post-Maastricht concept of European “citizenship”, then you shouldn’t fuss on this ground, at least.

Among those caught up in the misconceived ‘defend Galloway’ circus is Christopher Hitchens. But he is wrong.

George Galloway is Amy Winehouse. Both are primadonnas, desperately in love with their own self image. Both have notable vocal talents. Both are essentially public entertainers. Neither have the right to enter certain countries.

Because, in the case of Amy Winehouse, she is a feckless drug addict, who cannot appear in public without thumping somebody, getting hauled up before the beak, getting cautioned by the police, and then doing it all again. Earlier this month, she hit a woman at a charity ball. She is presently being prosecuted for assault. As a result she was denied a visa to enter the United States.

Galloway’s problem is that he appeared on TV handing money over to Hamas – something which is a criminal offence in Canada – and then daring democratic countries to prosecute him.

Or am I wrong? Is there a fundamental principle that requires drug addicted brawlers, or terrorist funders to be allowed into countries, if they say that they’re going to speak in public? Or sing?

Would George Galloway have been allowed into Canada if he hadn’t apparently committed a crime? Well, he has been allowed in before, to speak at a Syrian fascist rally. Here’s Terry Glavin:

When Galloway visited Ottawa two years ago, he was every bit as famous as he is now. He was the guest of honour at a publicly-advertised 74th birthday party for the Syrian Social Nationalist Party. The SSNP is an unambiguously fascist movement with shiny boots and uniforms, its own distinctive swastika, and an anthem sung to the tune of Deutschland, Deutschland, Uber Alles.

In these ways, a dirty thing goes unreported when it shows its true face, but is “widely reported” when it shows the face it wants us to see, and this is the face the news media has grown accustomed to presenting to us. In these ways, stenography masquerades as journalism, and journalism becomes something else again. Remember: the “news story” about Galloway that ended up going viral these past few days never even happened.

In that story, Immigration Minister Jason Kenney became so frightened that Galloway would say something fatally witty about Canada’s mission in Afghanistan that he lost his mind and invoked some little known police-state power to keep Galloway out of the country, and thus irretrievably contaminated Canada’s vital bodily free-speech fluids.

This is the story we were all invited to freely discuss. To guide us in our deliberations, the usual pundits took pains to affirm the virtue of their own avant-garde tastes and prejudices, and condescended to explain that Galloway is really just a flamboyant British philanthropist, and Ottawa was being mean to him because of his humanitarian work among the Palestinians, and well, you know, the Jews were being beastly about it.

Do you notice how this commentariat consensus wouldn’t have become so widely proclaimed if some Zionist cabal was controlling the media in Canada? Good. Thank you for noticing. Here’s something else you will want to notice.

George Galloway is what we used to call a fascist thug. But nowadays, his Canadian fan base, his megaphone-carriers and his booking agents include New Democratic Party MPs, Bloc MPs, the Council of Canadians, the Ottawa Peace Assembly and a legion of student leaders, trade unionists and “anti-war” activists.

Whatever name you want to give this phenomenon, it hasn’t been getting the attention it properly deserves. It’s been underway for quite some time.

We should be paying attention.

A friend kindly offers this: 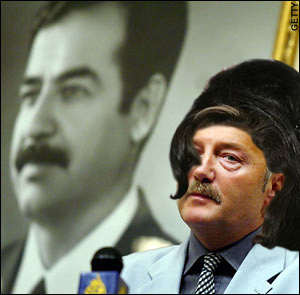