Since the Charity Commission has said that it relies on tip-offs from the public, let’s provide it with some more assistance.

This is a video of George Galloway handing cash to Hamas at the end of the “Viva Palestina” Gaza escapade. Note the large banner on the left of the screen that reads “Interpal”.

Was the banner raised by misguided supporters of Interpal, much to the chagrin of the charity itself? The last thing it needs, one might think, is yet more evidence of its links to Hamas.

Well, no, actually. Interpal has been keen to promote Viva Palestina and its Gaza convoy. It has been publicly named as a supporter and in January Interpal employee Majdi Akeel spoke to a meeting of the campaign’s backers in Manchester, alongside Galloway.

It’s a good match, since Viva Palestina is keen on Interpal. Its web site editor added this enthusiastic note to one of Yvonne Ridley’s dispatches from the convoy:

Editors Note: The Viva Palestina convoy are still taking donations via the website so you now have a choice about who to donate to – or better still donate to both. We hope to be working closely with our long-standing friends at Interpal in the future.

In fact, according to this web page, Interpal contributed a truckload of supplies to the convoy. Presumably the truck is this one, arriving in Gaza. 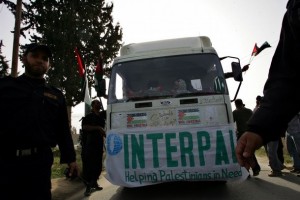 Furthermore, according to that report, three Interpal employees were with Galloway in Gaza. One of them was Majdi Akeel, who was a member of Hamas when he lived in Gaza and may still be one today, as we have reported before.

Elsewhere, on a blog set up by convoy participants and supporters, one commenter says Interpal was instrumental in getting its container through the Rafah crossing:

We have liaised with the Egyptian Medical Syndicate (Human Releif Agency ) in Cairo who are Interpal’s partners in the area, they distribute and deliver aid on behalf of Interpal on a regular basis and have assured us that they will take the aid through the Rafah gate, Interpal have organised this for us. We have contact names and numbers for the Director of the Human Relief Agency. The Egyptian Medical Syndicate is headed by Dr. Hamdy El Said, Dr. Abdel Monem Hasabala, Dr. Essam Erian, Dr. Ahmed Omr and Dr. Amen Shehata. All of whom have been involved with charity work in Gaza for sometime. Inshallah our aid will reach the people of Gaza, we beleive our brothers at Interpal are sincere and trust their experience in these matters as they have worked with Egyptian Medical Syndicate for some time. A lot of the items in our container are Medical aid, and the EMS are a well respected organisation in Egypt, we are confident that our container will reach Gaza. Allah is great and will not let the zionists defeat us.

Any pleas of ignorance of Galloway’s pro-Hamas politics on the part of Interpal would not be credible. As for his intentions for the arrival in Gaza, where rhetoric gave way to illegal acts, the celebration of Hamas apparently didn’t upset the Interpal delegation at all.

Why should it? Interpal is linked to Hamas. And for the most part it gets away with it. Unless, of course, the Charity Commission adds Interpal to its recently announced enquiry into Viva Palestina.