The week of smashed up shops with alleged Jewish ownership and supposed links to Israel continues.

Tonight I walked Rubert Street towards Shaftsburry Avenue in Central London and encountered quite a commotion on the corner. The police were cordoning off a section of the street and there were several police vehicles and about a dozen officers. I managed to capture the cause of the all this activity on my mobile phone.

Yes,  thugs have attacked another Starbucks. 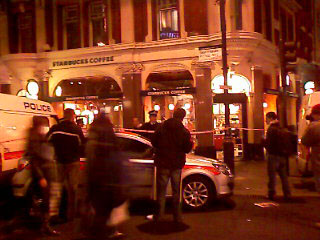 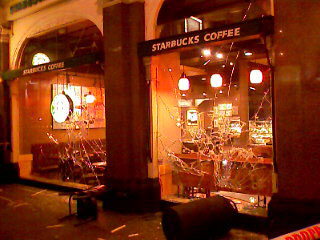 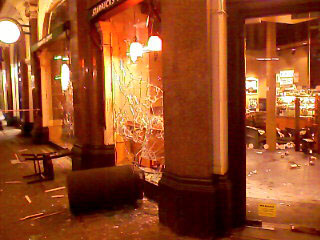 The antisemitic conspiracy loons and inciters who make irresponsible calls to “close down” shops, egged on by forums hosted on sites like Indymedia and elsewhere have done their job. The libel spreads.

Unlike the attack on a Starbucks in Whitechapel a few days ago which the thugs thought was empty, (but which wasn’t, and a manager could have burned to death had he not made it to the fire escape), this Starbucks would have been open for business. I saw the staff huddled behind the counter looking startled.

As you can see from the photos, crockery and furniture have been smashed to bits. A large litter bin has been thrown through the plate glass windows.

And still, after a spate of these attacks, the national media is silent, though there is a small mention of this evening’s attack in on the AP wires. Let’s see if the news desks of the national broadcasters think there’s anything worth reporting here.

UPDATE: They’re already crowing about the attack as some sort of victory at Indymedia.

UPDATE 2: There’s a short item, including a small photo, on the ITN News website. Another Starbucks – in Picadilly Circus – was also attacked, smashed and looted this evening.