So sang group after group of Muslim girls and boys, as they marched through West London today. From time to time, they varied their chant. Particularly popular was that other familiar call for the expulsion of Jews from Israel:

From the River to the Sea

Palestine will be free

The river is the river Jordan (although one young man told me that it was the Euphrates). The sea is the Mediterranean.

Every so often, a young man would shout out “Takbir”. The crowd answered “Allah Hu Akbar”. From place to place, along the route, men and women stopped, spread out a sheet, and bent in prayer at the appointed time.

It would not be fair to describe this as a Hamas rally. I should qualify that. Immediately before the 1980s singer, Annie Lennox was introduced to the crowd, the compere announced to the crowd:

We all support Hamas

And, certainly, Hamas flags and posters were displayed prominently by many members of the crowd. 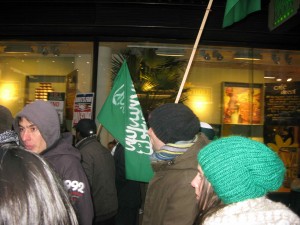 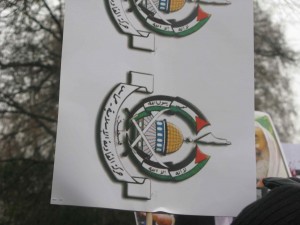 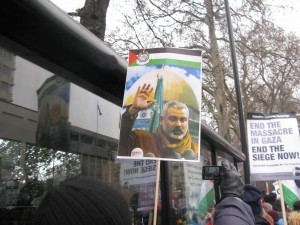 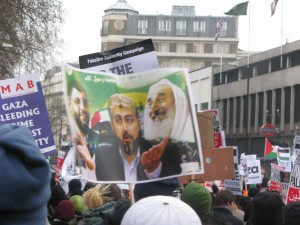 However, to describe it as a Hamas rally would been to ignore the Communists, Trotskyites, Jewish Socialists, Trade Unionists and Quakers and members of other small sects, who also marched in solidarity with the Islamists. There was even somebody with a placard that advocated “sharing”. Nice.

And then there were the representatives of many other countries and religious movements whose supporters turned up to fly their flags. 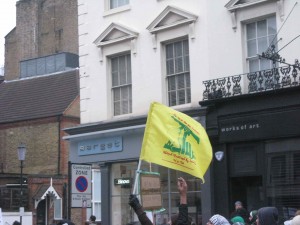 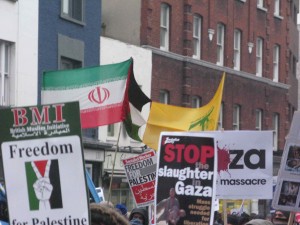 … along with the flag of its paymaster, the Islamic Republic of Iran 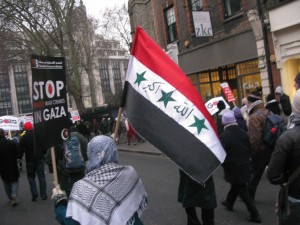 This woman was nostalgic for the good old days of Saddam 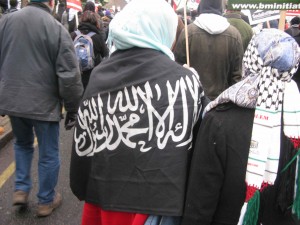 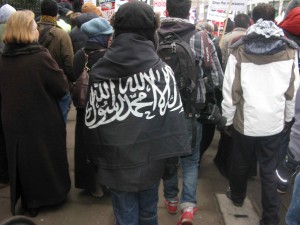 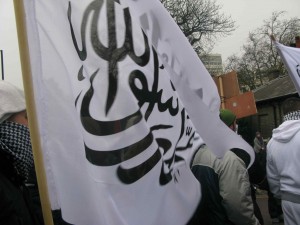 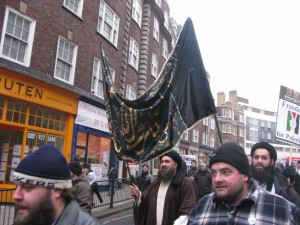 … and some others I can’t identify. Possibly Lebanese Shiites.

But the most prevalent religious symbol was the Jewish Star of David. A recurring theme was the Star of David twinned with the Nazi Swastika.

The reason that Islamists, Fascists and the extreme Left twin the Jewish symbol with the Nazi Swastika, is that they enjoy taunting Jews with their slaughter during the Holocaust. 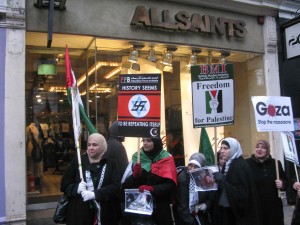 But look again. The Swastika is obliterating the Star of David.”History Seems To Be Repeating Itself”, says the slogan. And they can hardly wait to repeat it.

There was, in fact, more Nazi imagery on display at that march than you’d expect to see at a fascist rally. Here are some more images: 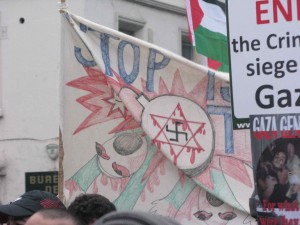 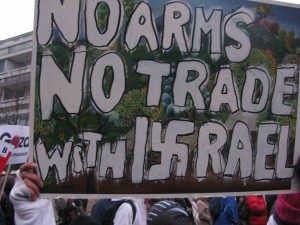 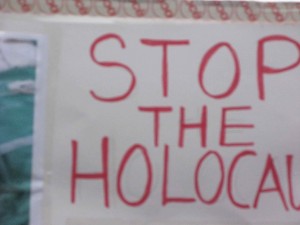 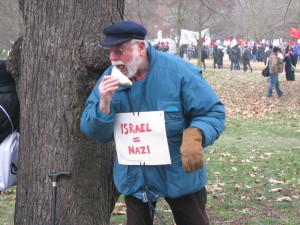 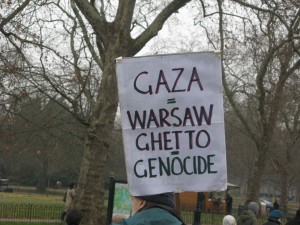 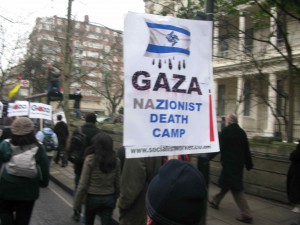 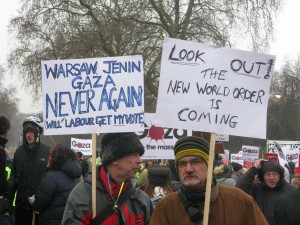 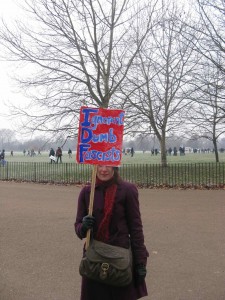 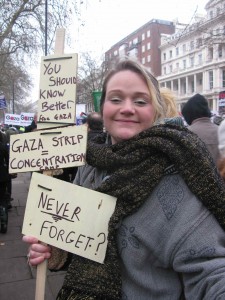 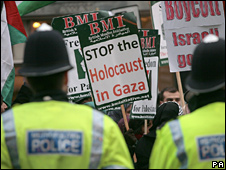 Now, if you’re a Hamas supporter, you probably think that there’s nothing funnier than teasing Jews with their history of persecution and genocide, as they struggle to protect themselves against a clerical fascist movement that openly declares its desire to kill them all.

It is much funnier – for me at least – when a protestor quotes from a Smiths lyric. 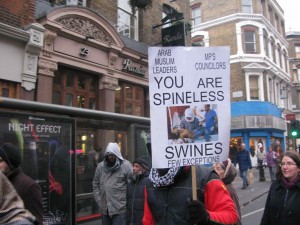 I saw our friend, David Rosenberg on the march.

He posts his observations over at Socialist Unity:

* Although the vast majority of placards were clearly in line with the demands of the demonstration (end the siege, stop the killing) there were more than a sprinkling of placards this week with Nazi analogies etc that were more than borderline antisemitic and will be used by opponents to discredit the protest. Again the organisers/stewards need to think about how to deal with this.

* The SWP colonised a large section of Speakers corner where the march was gathering and were bellowing puerile slogans through their megaphones at the demonstrators as they arrived, appealing to them to “destroy Israel” (and presumably among them the Israeli anti-war movement) and calling on Zionists to “Go back to New York”. Not sure which aspect of socialist theory they think that comes from. But if they think the problem is Israeli/Jewish people rather than the oppressive Zionist state then they really have a lot of learning to do.”