Speaking during the annual “UN Day of Solidarity with the Palestinian People,” General Assembly President Miguel D’Escoto accused Israel of apartheid and and called for “a campaign of boycott, divestment and sanctions” against it. He also claimed that Palestinians are being– yep– “crucified” by Israel.

D’Escoto, a Roman Catholic priest, served as foreign minister for the Sadinista government in Nicaragua from 1979 to 1990. He won the Soviet Union’s coveted Lenin Peace Prize for 1985-86. (Did anyone ever turn down that stupid prize?)

D’Escoto has remained close to the child-molesting, corrupt and repressive Nicaraguan president Daniel Ortega, even after other leading Sandinistas have, in Marc Cooper’s words, “run screaming away from the Frente Sandinista.”

D’Escoto hugged Iran’s President Ahmadinejad after he told the General Assembly in September:

The dignity, integrity and rights of the American and European people are being played with by a small but deceitful number of people called Zionists. Although they are a minuscule minority, they have been dominating an important portion of the financial and monetary centers as well as the political decision-making centers of some European countries and the US in a deceitful, complex and furtive manner. 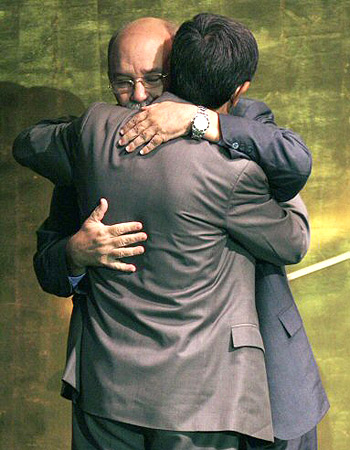 Ahmadinejad’s words were rightly condemned by Barack Obama as hateful and antisemitic.

This sort of thing is so common these days that it would hardly be worthy of notice– except that D’Escoto told The Jerusalem Post last month that he “loved” Israel but disagreed with its policies.

Such “lovers” Israel can do without. At least most people who say and do the sorts of things D’Escoto has said and done don’t pretend to be anything other than what they are.

Update: According to the Catholic News Agency, the Vatican suspended D’Escoto from the priesthood in the 1980s for his political activities.