Some religious services are gender segregated. I don’t hold with that and therefore I tend to avoid such events.

Men at the Front: 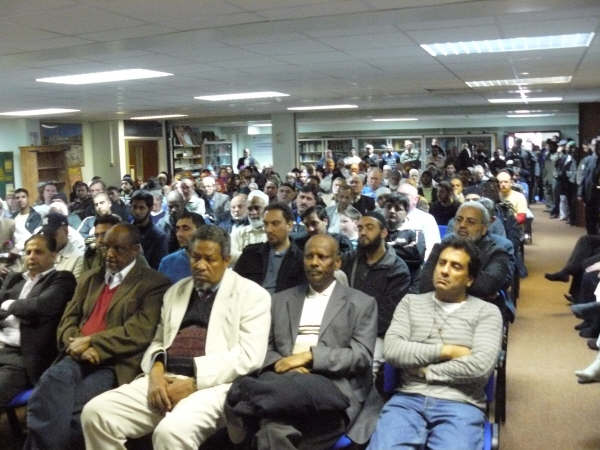 Women at the back: 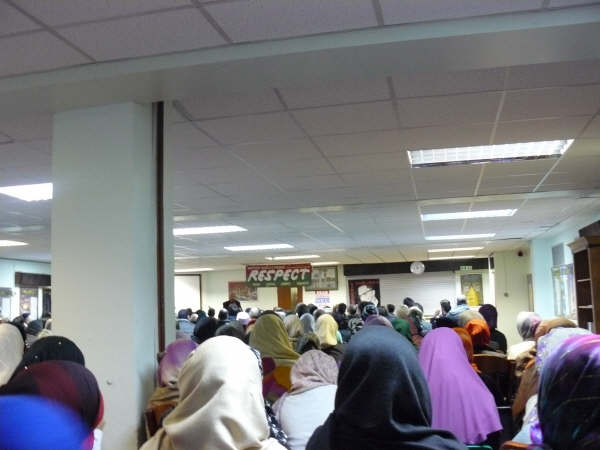 I ave myself organised meetings for the Stop the War Coalition where there is seperate seating for women; at the request of Muslim women themselves

The point being that by so doing more women are involved, who otherwise wouldn’t have come to the meetings, and would have been excluded by the sectarian secularism of those who prefer to reject women’s choices to be involved on their own terms, and insist that Muslim woomen should only take part in politics on terms acceptable to white atheists.

There is very little an org. can do if a group of women ask for seperate seating. But it could suggest that it be parallel rather than they sit at the back.

‘Why are the women sitting at the back?’ Because that is where a number of them wanted to sit and felt most comfortable sitting. Like it or not, that is their right. They could have sat anywhere.

So, what fare was served up at at this gender-segregated political meeting? Why, George Galloway’s open support for the Taliban, that’s what:

George drew his speech to a close with an emotional account of how the grieving mother and father of a Soldier killed in Afghanistan had approached him recently at the end of public meeting. He explained their anger and confusion how they blamed the Taliban, and with pride how their son had died with a “picture of the Queen in his breast pocket”. George said how difficult it was to tell them that the “Queen didn’t have a picture of their son, didn’t attend his funeral” and they should blame the the government that sent their son to his death not the people of Afghanistan who have a right to resist the occupation of the country.

The meeting was also addressed by Salma Yaqoob, who is apparently very concerned about the “denigration of women in computer games“.

But not, apparently, by the shunting of women to the back of a room.