I’m not particularly opposed to religion. I think it would be nice if it were true that there were a God and that s/he cared about us. But I don’t believe that there is.

I have no problem with religious people seeking to persuade me that there is a God, and that their God is the best one. I perfectly understand why they want to do so.

Religious is a huge comfort to many people. However, there are some people for whom faith is a source of worry. What if I’m a member of the wrong religion? What if my worship is not acceptable to God? What if I’m sinning? Will I be saved?

Non religious people do have a moral obligation to relieve those who are not really suited to religion from these sources of unnecessary stress. And this is where the Athiest Bus Campaign comes in.

Ariane Sherine on CiF explains the thinking behind the campaign:

As you read this, a new advertising campaign for Alpha Courses is running on London buses. If you attend an Alpha Course, you will again be told that failing to believe in Jesus will condemn you to hell. There’s no doubt that advertising can be effective, and religious advertising works particularly well on those who are vulnerable, frightening them into believing. Religious organisations’ jobs are made easier because there’s no publicly visible counter-view to refute their threats of eternal damnation.

The Atheist Bus Campaign aims to change this. In addition to the slogan, the adverts will feature the URLs of secular, humanist and atheist websites, so that readers can find out more about atheism as a positive and liberating alternative to religion. We’ve also set up an interactive campaign website and Facebook group, so that questions raised by the adverts can be publicly debated.

A Pledgebank campaign was started – and stalled – the purpose of which was to raise money for the following slogan, to be carried on a bus for two weeks: 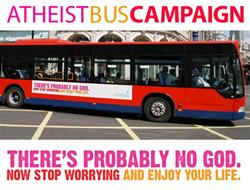 The campaign has now been relaunched.

The Atheist Bus Campaign launches today, Tuesday October 21 2008. With your support, we hope to raise £5,500 to run 30 buses across the capital for four weeks with the slogan: “There’s probably no God. Now stop worrying and enjoy your life.”

Professor Richard Dawkins, bestselling author of The God Delusion, is officially supporting the Atheist Bus Campaign, and has generously agreed to match all donations up to a maximum of £5,500, giving us a total of £11,000 if we reach the full amount – enough for a much bigger campaign. The British Humanist Association have kindly agreed to administer all donations.

With your help, we can brighten people’s days on the way to work, help raise awareness of atheism in the UK, and hopefully encourage more people to come out as atheists. We can also counter the religious adverts which are currently running on London buses, and help people think for themselves.

As Richard Dawkins says: “This campaign to put alternative slogans on London buses will make people think – and thinking is anathema to religion.”

The campaign is doing rather well. As of 11.30, it has raised close to double its target.

Remember: the more money you pledge, the more people will hear the good news that we do not have to worry about eternal damnation, and the more time they will be able to spend living their lives well.

Gosh. They’ve got enough for two lots of buses now!

Bearded loon, Stephen Green of Christian Voice is doing his “Lovely posters. Pity if they were to get graffiti-ed on” act.