Despite having actual memories of 1968– one or two of them even fond– I’m going to pass on this celebration of that year’s utter grooviness.

Co-authors of Beyond the Fragments, Sheila Rowbotham, Lynne Segal and Hilary Wainwright are reunited at the ‘Long Hot Summer Night of 1968 Inspiration’ party to revisit the birth of a revived womens’ liberation movement and social movements of protest that was such a major part of 1968.

Poetry from one of the stars of the performance poetry circuit, Polar Bear (see www.myspace.com/polarbearspoken ). Joined by one of the legends of 1968 poetry, shadow laureate, Adrian MItchell

Exhibition all the way from San Francisco, and designers of the party poster, the extraordinary silk-screen posters made famous by their work for Jello Biafra and others, the Firehouse Kustom Rockart Company, see www.myspace.com/ukrockposterexplosiontour

The party is organised by Philosophy Football in association with Red Pepper magazine (see www.redpepper.org.uk ) and the Fire Brigades Union (see www.fbu.org.uk )

Here in the United States, at any rate, the early 1960s were dominated politically by the epic and inspiring struggle for civil rights for African-Americans and other minorities. In that struggle there was a clear sense of justice– of being on the right side of history.

By the late 1960s, however, the questions of right and wrong were becoming a lot more confused. The struggle for racial equality was still vital– but did that require one to line up politically with the extremists,thugs and antisemites of the Black Panther Party? The war in Vietnam had become a seemingly endless nightmare– but did opposing it require one to proclaim solidarity with the Stalinists of North Vietnam? And much of the received cultural and political wisdom of previous decades deserved to be challenged– but too often wasn’t that just an excuse for personal self-indulgence and more-radical-than-thou posturing?

The two main events of 1968 that genuinely inspired me were Robert Kennedy’s campaign for president– uniting blacks and working-class whites with a sense of genuine hope– and the Prague Spring, with its unironic promise of socialism with a human face. Of course both ended abruptly and tragically. And even if they had been allowed to continue, who can be sure they would have fulfilled the extravagant expectations we placed on them?

But getting back to the “Long Hot Summer Night of 1968 Inspiration” party: I see that the organizer, Philosophy Football, is in the t-shirt business and has released a set of shirts (collect ’em all?) to mark that memorable year.

Can anyone see what’s wrong with these pictures? 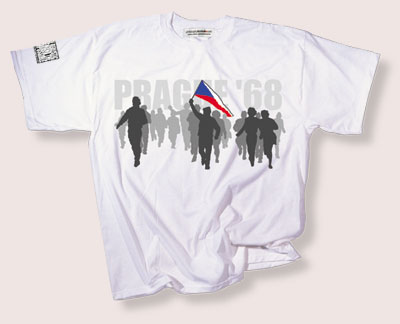 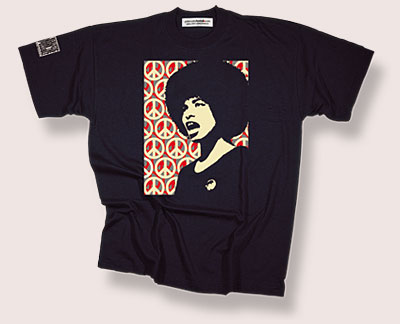 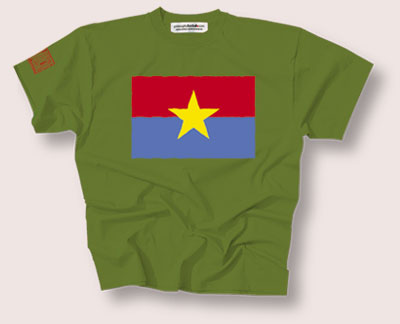 That’s right. Angela Davis and Vietnam’s National Liberation Front did not support the Prague Spring or oppose the Soviet invasion that crushed it. As a leading member of the US Communist Party, Davis loyally lined up with those who justified the Soviet action as a defense against counter-revolution. According to a 1972 Time magazine report on the trials of Prague Spring supporters:

The defendants are all party officials or intellectuals. But such revenge is costing the regime heavily among its friends abroad. Italian, British and Swedish Communist newspapers have criticized the trials, and so has the acting head of the French Communist Party, Georges Marchais. One exception: U.S. Communist Angela Davis, to whom Czechoslovak liberals appealed for help. She let it be known through a friend that in her opinion, people in Eastern Europe got into difficulties and ended in jail only if they were undermining the government.

And who believes the National Liberation Front– an arm of the hardline Communist regime of Ho Chi Minh– had any sympathy for the heroes of Prague 1968? There’s no record of it that I can find.

But hey: the Czech struggle for freedom, Angela Davis, the NLF– they were all righteous and right-on. Who cares if the latter two were happy to see the first crushed? After all, it was the Sixties, man.