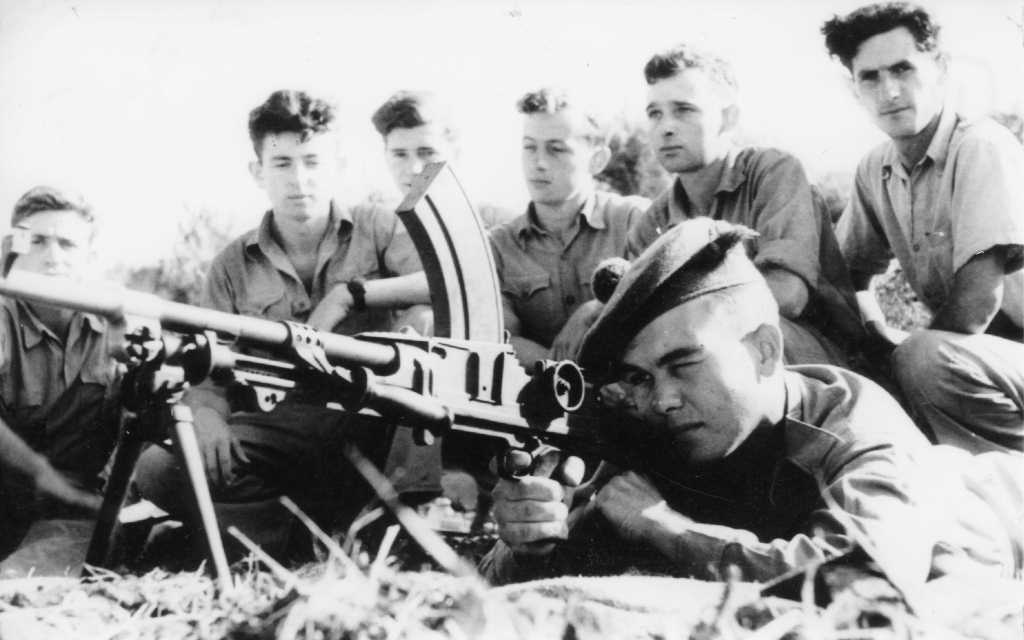 We miraculously arrived in Eretz Israel from Hungary, Romania, Croatia and Slovakia in early 1943 and were educated in Kibbutz Shaar Haamakim within the framework of the Youthalia.

At the beginning of 1946 – most of us were just 18 years old – we decided to volunteer for the Palmach, the Haganah’s commando unit. We had the feeling of a tragic omission because of the Shoah – as did most of the Jews of the Yishuv. The formation of the Palmach and the reinforcement of the Haganah made it possible for the Jewish leadership after the end of World War II to also actively oppose the British Labour government’s policy of using force to prevent the immigration of survivors. We felt part of an anti-colonial national liberation movement.

In the summer of 1947, I was ordered from the First Regiment of the Palmach to the Second Regiment in the Negev, to the religious kibbutz Beerot Yizchak to guard the water pipeline. In order to legally carry a weapon, I took an oath to King George VI and was given a rifle, ammunition and the uniform of an auxiliary policeman. My new comrades were all Zabarim (born in the country) except for one immigrant from Turkey.

That same day, my group of five men received orders to patrol in an open car to protect the water pipeline from attack. We kicked up a lot of dust and always drove along the water pipeline. After a week, the duty changed and we had to go on patrol at night, walking 10 or 15km in the dark, lying in the sand all night, hoping to catch the Bedouins, who often enough shoveled away 50-60cm of sand during the day or night to shoot into the water pipeline. Never could we catch them at it. Although they also benefited from the water pipeline, some of these nomads had taken to sabotaging it.

In October, we were transferred to the new religious cooperative village of Tkuma near Gaza. From here we also guarded the water pipeline.

I planned to spend my annual leave with my brother Erwin in Jerusalem at the end of November 1947. I felt very privileged because some of my friends who had come to the country as I had in 1943 had lost their entire family in the Shoah. Erwin was 15 years older and had been in the country since 1935. After six years in the British military, he was discharged 1946 and was working for the city government.

My brother was waiting for me at the bus station on November 28 and we walked to the Bukharian quarter, where my brother had rented a room with a religious family. On November 29, we listened to the radio to watch the UN General Assembly vote. We cheered when we heard that the majority had voted for partition.

Fifty years after the founding of the Zionist movement, Theodor Herzl’s dream came within reach. Often forgotten today, there was also to be a state for the Arabs of Palestine, who had never had one before. But on September 21, 1947, Mufti Amin el Husseini had met British officials who wanted his opinion on the partition plan. He appeared confident of victory: “We do not fear the Jews,” he said. “We would have many losses, but in the end we must win […] They will eventually crumble into nothing and we do not fear the results unless Britain, America or some another great power intervenes. Even then we shall fight and the Arab world will be perpetually hostile.”[1]

While Arab leaders rejected the United Nations decision with indignation, there was dancing in the streets of the Yishuv. The very next morning, the radio reported an Arab attack on two Jewish buses near Kfar Syrkin, in the center of the country, with seven fatalities. Although I still had a week of leave and my brother asked me to stay, I packed my bag to go back to Tkuma. I thought that there might be Arab attacks there as well.

On December 13, 1947, my group of five was assigned to day patrol. But I woke up for the first time in my life with a terrible headache; there was chamsin, a dry, hot wind from the east that brings fine particles of sand. I asked at breakfast if anyone wanted to switch with me, Arie Schwarzmann agreed and our commander agreed. To us Arie had claimed to be 18 years old but he was only 16 when he came to the Palmach.

I lay down and tried to sleep. At noon we heard gunshots from a distance and already in the early afternoon the news came from the British police in Gaza that our comrades had been killed by Bedouins and that we could pick up their bodies at the Gaza police station.

I slept all alone in the room the following night because my four roommates were no longer alive. It was a terrible feeling to know that I was only alive because I had asked for a replacement that morning due to my headache.

In the late afternoon of December 14, we drove our open vehicle and a truck to the Gaza police station to pick up the bodies. When we came near this Tegart fortress[2], Arabs with rifles stood at a distance of 20 to 30 meters and shot at us. Fortunately, none of us were hit.

Arriving at the fortress, a British police officer received us with the news that the bodies had already been transferred to Beersheva. We asked him to provide us with a protective escort, but he refused. Fortunately, we were allowed to wait for nightfall to drive back.

The next morning we drove to Beersheva. Here, the British Army was in charge at the police station. The officers had already heard about our adventure in Gaza and greeted us warmly. We were fed and offered cigarettes. We were, after all, British auxiliary policemen in uniform, and that moved the
British commander to grant us a protective escort. In front of us drove a tank, behind our two vehicles drove two armored cars with British soldiers. We took the bodies of our comrades to nearby Kibbutz Mishmar Hanegev. Fallen were our non-commissioned officer Israel Berkovits, 19 years old, soldiers Yizchak Yehoshua Schuster also 19 years old, Arie Schwarzmann 17, Shabtai Selins, 18 and Shmuel (Mula) Unger, 17 years old. Honor be to their memory.

In the first month of the war, we realized how few and how isolated we were. Our regiment was not even half of its target strength and already had 25 dead. We, the five surviving Palmachniks from Tkuma, were transferred to the new military camp next to the water tanks of Mekorot near Nir Am. In the beginning, there was a lack of everything and so we slept in the open for a few days, which we did not mind much.

In Nir Am were both the staff of the Second Regiment, and then later the staff of the Negev Division. Very soon at the beginning of 1948 a field hospital was also established there with 24 beds and an operating room.

Most of us were not yet 20 years old and the officers were not much older. We were busy with day and night patrols. At night we sneaked near an Arab village with two-inch mortars and fired a few times in the direction of the village. The purpose of the exercise was to intimidate the free-armers who were there.

Even before the war began, the AHC [3] had decided to hire non-Arab mercenaries to train Arabs and fight alongside them. To this end, escaped German POWs from British POW camps in Egypt, Polish Army soldiers who had remained in the Middle East, British deserters from the army and Mandate police, and Bosnian Muslims and Croatian Ustasha fascists who had fled Yugoslavia were recruited by various Arab groups.

The knowledge that Germans, Bosnians and Croats had come to the country to fight against us motivated us even more, because they could no longer pretend to do only their duty, they hated Jews. We were determined – less than three years after the end of the Second World War – not to be slaughtered by the foreign mercenaries or by anyone else.

2) The Tegart forts were built in British Mandate Palestine from 1936-39 (and some thereafter) as part of the war against Arab terror. The initiator of the project was Sir Charles Tegart, a former commissioner of the Indian police. Tegart had fought terror in Bengal in the 1920s and was invited by the Mandate government to advise it on combating Arab terror in Palestine.

3) AHC Arab Higher Committee, founded in November 1945 on the initiative of the Mandate power, led by Mufti Amin el Husseini in 1947.