It’s the weekend and even HP stalwarts may need to take a break from the weighty issues of the world and enjoy some fluff. 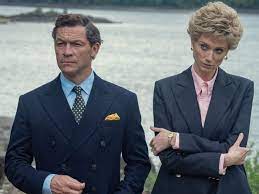 Has everyone caught the latest season of the Crown? Apart from the usual controversies, mainly Charles 3, allegedly trying to undermine and even unseat his boss, did anyone have issues with the acting? Why was Charles 3 constantly chewing his mouth, yeah I get that he has to speak like he has marbles in his mouth, but Dominic West came across like an angry cow in many scenes. It was news to me that Charles 3 fancied himself a radical but I never claimed to be well-informed about the bloke. The actress portraying Diana appeared too beaky and birdlike in trying to copy Diana’s famous mannerisms, and it also seemed unlikely that her character had no filters whatsoever and  was so ready to share her disaffection with all and sundry at first introduction: Hello, I am Diana and I hate those bastards over there! There is one character who has been redeemed by the series, Prince Philip, who  is portrayed as the intellectual giant of the royal family. Carriage driving may yet take off.

What may not take off is the Shaftesbury’s Mrs Doubtfire the Musical. I don’t know which optimistic person came up with this revival at this time in history when men in dresses are so celebrated as stunning and brave™.  However the ire of transactivists has been drawn and it may be only a matter of time before the antifa arrives to fiddle its tits and scream abuse, one hopes. I didn’t like the original movie and it was made worse by a very successful Tamil version where Mrs D was a fat and jolly Brahmin granny with a terrifying latex face. That version was played on a loop for many years on the single Tamil TV channel we had in Singapore. How I suffered.

Punjab was trending on twitter and I read that the state of Punjab had banned the movie Joyland. Joyland is a Pakistani film, highly lauded on the art film circuit, that has a transwoman lead and the story is about a married man who falls in love with the lead when he joins a theatre troupe. I initially assumed that the state of Punjab referred to  the Indian Punjab and that India and Pakistan were sharing a rare moment of unity. Nope, the turmoil is all in Pakistan as the government has flipflopped on banning the film and state governments are stepping into the breach. Like Iran, deeply homophobic Pakistan has a preference for transing the gay away and has laws that recognise trans rights on paper. The Guardian is on the case and all will be well. Enjoy your weekend!