Much has been made of the loss of moral authority the US has suffered as a consequence of George Bush’s post-911 military solutions to jihadism and security threats. Still, it cuts both ways. Part of Bin Laden’s strategy was that any response from the US would cause Muslims to join his cause in a “you’re either with us or against us” manner. Early on, this seemed to be working, but the ideological purity of Al Qaeda’s Takfiri principles and their justification for massive, and often deliberate, loss of civilian life (including Muslims) was always going to be a public relations problem.

You can’t go around beheading whole villages in Iraq, or blow up markets full of innocent people and expect people to march behind you. The anti-war movement and Sean Penn may accuse Bush of murdering hundreds of thousands, but even amongst Jihadist circles it does get noticed that the direct responsibility for a lot of those deaths may not lie with Americans.

Some in the US are already starting to talk about the demise of Al Qaeda:

Mr Zarate and others have seen several recent encouraging developments. Ayman al-Zawahiri, deputy to Osama bin Laden, held a 90-minute Internet conversation with radicals during which he was forced on several occasions to defend al-Qa’eda’s killing of Muslim civilians.

The senior official said the formation last month in London of the Quilliam Foundation, the counter-extremist think-tank led by former Hizb ut-Tahrir members Ed Husain and Maajid Nawaz, was another reason for optimism.

“There are indicators all over the world of where al-Qa’eda’s programme is not meeting with the grand acceptance that it assumed,” he said.

The US is heartened by al-Qa’eda’s failure to create a political wing or to dilute its policy of violence as a means to establishing a new caliphate.

“They are not going to stop bombing people and claiming that those who don’t think like them are unbelievers. They are almost digging a deeper hole for themselves by finding new enemies,” the official added, citing a recent Zawahiri audio message that berated the United Nations, Norway, Japan and Buddhists along with familiar targets like the US and Britain.

Of course, that still leaves us with a massive problem, but it is far from the clash of civilisations that Bin Laden wanted. 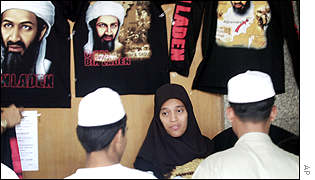 “Yes Sir, they are two for the price of one now, with a free al-Zawahiri bobble-head.”