Writing for the Index on Censorship website, Venezuelan blogger Daniel Duquenal makes an excellent point about the Chavez government’s recent action which forced the independent TV station RCTV off the air:

Since 2004, two open air signal private networks with nationwide coverage have caved in to government pressure and became neutral, if not pro governmental. After Chavez’s 2006 reelection RCTV was the only critical network left with national open air coverage. The other critic, Globovision, has open signal in Caracas and Valencia and requires cable elsewhere. Cable systems only reach about 25 per cent homes in Venezuela. With the closing of RCTV, maybe 70 per cent of Venezuelans have nothing for information but a deluge of pro governmental propaganda. This percentage is much higher among those on lower incomes, who depend more on free open air transmissions.

So if you’re wealthy enough to afford cable, or if you happen to live in the right place, you can still get access to whatever critical coverage of Chavez is still available on TV in Venezuela. (Of course the government can always declare a cadena, which means that all over-the-air radio and TV stations in the country are forced to broadcast whatever the government wants them to broadcast.) But if you’re among the majority who can’t afford cable, and you can’t receive Globovision’s open signal, you’re out of luck.

Well, I suppose you can always turn on your computer and go online to find critical coverage of the government. What’s that? You can’t afford a computer and an internet connection either? Gee, too bad. But really, folks, you’re not missing anything important, just a bunch of imperialist/Zionist propaganda…

I suppose some chavistas would tell us that because the poor overwhelmingly support Chavez, they have no interest in seeing or hearing anything other than praise for El Presidente; it’s only the privileged elite who are upset when critical sources of news are effectively shut down. For large parts of the country, televised access to dissenting views on the government is now a luxury for those who can afford it. Can you imagine anything more utterly contemptuous of the poor?

In fact it’s more than just the privileged elite which opposed the shutdown of RCTV. Seventy percent of Venezuelans, according to an April poll, were against it, including 40 percent of those who identified themselves as supporters of Chavez. The chavistas who constantly cite public support for Chavez’s actions as a reason to give him a political free hand may have a hard time explaining this away. Or is this the one time when the interests of the state trump the vagaries of public opinion?

At any rate, it’s refreshing when a Venezuelan government official drops the official propaganda line on RCTV and speaks from the heart:

Temir Porras, who began working in the Chávez government in 2001 and is currently an advisor to the minister of industry and commerce, has a similar view. “Of course there are political motivations [for the RCTV shutdown], and I support that. A media outlet should not adopt one particular political line,” he said in an interview. “Venevisión and Televen, for economic reasons, realizing that Chávez will be around for a long time, re-accommodated their political line after the coup. RCTV and Globovisión didn’t. They forgot that their existence depends on Chávez. I am sure that when the Globovisión concession expires, Chávez will not renew it — we can say that right now. Unless, of course, they try to moderate their tone, which would make them look rather ridiculous. Essentially, those that collaborate with the government project will be left in peace — that can be said about media outlets as much as landowners or other actors.”

And here, I fear, is an example of what increasingly will happen to those who decline to “collaborate with the government project.” 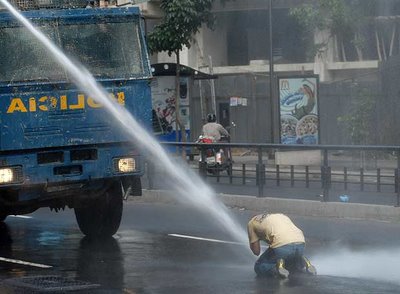