Chris Eubanks has beclowned himself.

It is, after all, what he does best. 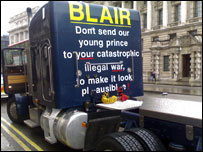 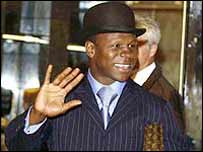 “Former world champion boxer Chris Eubank has been arrested for an alleged breach of the peace while demonstrating in his truck in Whitehall.
He had been driving his truck bearing a banner stating: “Blair, don’t send our young prince to your catastrophic illegal war to make it look plausible.”
Witnesses said Mr Eubank drove up and down Whitehall blowing his horn

The young prince in question is the son of the late Diana, Princess of Wales and the semi-professional game show contestant, James Hewitt.