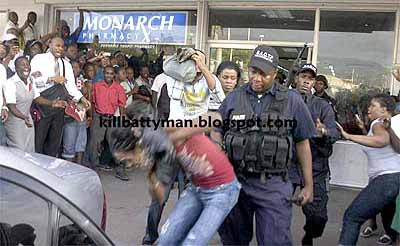 Last week, a lynch mob of over 200 people gathered outside a pharmacy in Kingston, Jamaica. Their target: a group of three apparently gay men inside the shop. They demanded that the men be handed over to them for, at best a severe beating, or – more likely – extra-judicial execution. This is not uncommon on the notoriously homophobic island.

A fourth man, a leader of the Jamaican gay rights group JFLAG tried to intervene but became a target himself. It was a brave move on the part of Gareth Williams, since his predecessor, Brian Williamson, was violently murdered, as was his colleague, AIDS activist, Steve Harvey, abducted and shot just over a year ago.

Besides the well-known glorification of these attacks on lesbian and gay Jamaicans by Buju Banton and other dancehall artists, a blog inciting the murder of gay people – killbattyman – is being hosted by Google’s blog service, Blogspot.

The photo above is one in a series of photos of this incident on this blog, posted under the charming heading of “Bring out the Gay!!!“. They also published a video of a Jamaican TV news report about the incident. At one point, a viewer in the background can be heard cackling with laughter as the violence unfolds on the screen.

This is not a free speech issue. Incitement to murder shuts down the very exchange of ideas that free speech seeks to promote. It is illegal, and it doesn’t come much clearer than the name of the blog: “Kill Batty Man (gays)”.

In the light of ongoing violent attacks against Jamaica’s gay community – why is Google allowing its services to be used to incite murder by hosting this hate-site?

Please consider writing to the Corportate Communications office in the UK requesting that they take killbattyman.blogspot.com offline:

As a footnote, the men were beaten by the police during the rescue and Gareth Williams was hospitalised. On the plus side, a police beating was better than a mob lynching. So there’s some progress.

UPDATE: Google have removed the blog.