With all the bad news from France, perhaps the life story of C.P. Ellis– who died last week in North Carolina– can serve as a reminder that human beings are capable of more noble things.

According to the Durham Herald-Sun:

In 1971, he agreed to participate in a forum on school desegregation in Durham. Also in the group was Ann Atwater, a black civil rights activist who was well-known locally.

Mutual suspicion melted into respect during the 10 days of talks, as Mr. Ellis and Ms. Atwater became friends and Mr. Ellis became persuaded that whites, especially the poor, stood to gain from the civil rights movement more than under segregation.
…..
Ms. Atwater said she visited Mr. Ellis not long ago, and although Alzheimer’s disease had robbed him of memories of their collaboration, he still recognized her name.

Though she has suffered for years from the effects of diabetes, Ms. Atwater was able to attend Mr. Ellis’ funeral, at which she spoke.

What a remarkable woman. How many of us would have whatever rare quality it took to reach out, like she did, to someone representing such a hateful movement?

In a 1999 interview in The Herald-Sun, Mr. Ellis said his experiences in the labor movement helped pave his way to bridging the racial divide.

“I would hear black workers talking about the same problems as white workers, and I could see the common interests we shared. It helped me overcome a lot of prejudice in my life,” he said.

There’s a lesson in that too. 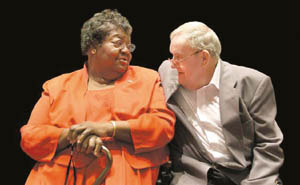