Syrian President Bashar Assad threatened former Lebanese prime minister Rafiq Hariri with “physical harm” last summer if Hariri challenged Assad’s dominance over Lebanese political life, contributing to a climate of violence that led to the Feb. 14 slayings of Hariri and 19 others, according to testimony in a report released Thursday by a U.N. fact-finding team.

The report, which calls for an international investigation into Hariri’s death, describes an August meeting in Damascus at which Assad ordered the Lebanese billionaire to support amending Lebanon’s constitution, according to testimony from “various” sources who discussed the meeting with Hariri. The amendment, approved Sept. 3, allowed Emile Lahoud, the Syrian-backed Lebanese president, to remain in office for three more years.

Assad said that “Lahoud should be viewed as his personal representative” in Lebanon and that “opposing him is tantamount to opposing Assad himself,” the report states. Assad then warned that he “would rather break Lebanon over the heads of” Hariri and influential Druze political leader Walid Jumblatt “than see his word in Lebanon broken.”

If you picture Assad speaking to Hariri in a Don Corleone voice, it starts to make sense. 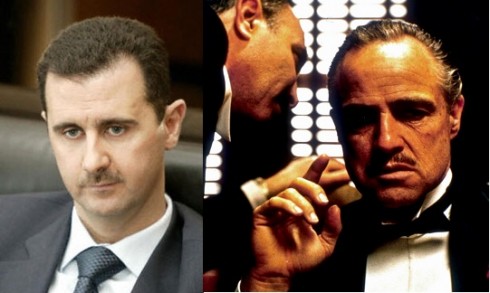 Of course Don Corleone would have threatened a lot more subtly.

Anyone still suspecting that Hariri’s murder was an Israeli plot?