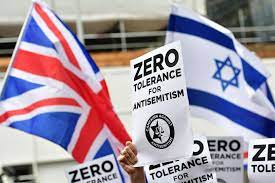 This past week, Rebecca Tuck, KC, released her report on antisemitism in the National Union of Students. It makes damning but not surprising reading. Ms. Tuck’s handiwork is precise and delicate, carefully distinguishing between legitimate political opinion and prejudice, between mischance and intention, and giving the benefit of the doubt wherever she can. But when she’s done, we’re still left with a mass of unambiguous bigotry. Most of it comes from the NUS’s elected officers, candidates and volunteers—students, in other words. The paid staff come across as doing their best, mostly.

If there was ever any doubt that “anti-Zionism isn’t antisemitism” was a glib evasion and that the demonization of Israel leads to the demonization of Jews, Rebecca Tuck’s report should put an end to it once and for all, but it won’t. She notes that the NUS has no difficulty identifying and condemning far-right antisemitism, but of course British universities are really not right-wing spaces and swastikas on campus, though foul, are blessedly rare. The vast bulk of the episodes in the report are the other kind: case, after case, after case of Jews being targeted in the context of anti-Israel activism—and being ignored, dismissed, gaslit or piled on.

One thing that particularly caught my eye and even surprised me was this: Fifteen organizations made submissions to the investigation. The NUS and the Union of Jewish Students, the central protagonists, were two. Four were other Jewish organizations. There was a single supportive, non-Jewish group, Labour Against Antisemitism. Not one submission came from any broader anti-racism campaign, in or out of academia and a full eight, in this investigation of harm to British Jews, were from “pro-Palestinian” groups, two of them all the way from Canada. Ms. Tuck makes no comment on this, except to note that every one of these wrote to object to the IHRA antisemitism definition and complain that focusing on antisemitism interferes with their activism. I’m having trouble imagining anything comparable in another context: a report, say, on Islamophobia where over half the input was Christian objections. I’m not having any trouble at all imagining what the reaction would be if that were ever to happen.

The NUS, to give them credit, have started off well, with a quick and sincere-sounding first response. There is no equivocation. They accept and acknowledge Ms. Tuck’s conclusions and “are confident that the investigations have been thorough, fair and conducted to the highest standards throughout.” They promise to implement her recommendations and even set out a timetable for doing it.

On the other hand, this is not exactly their first rodeo. The report lists seven times in seventeen years that the NUS have been investigated for the same thing and here we are again, on number eight. But beyond simply the predictability of the habitual offender, what makes me pessimistic that this time is different is the thing that the NUS won’t make themselves see and Rebecca Tuck isn’t permitted to tell them.

Ms. Tuck has been scrupulously careful to distinguish between antisemitism and political opinion, as she must. People are allowed their politics. The problem is that good people find themselves acting hatefully toward Jews because anti-Israel politics itself is soaked in Jew-hate. Because the antisemitism doesn’t merely exist coincidentally alongside the politics, it can’t be fixed by thinking “We can keep on as we were, only more politely.” It’s the politics the NUS needs to reflect on; a pep-talk about manners won’t do the trick.

Training the NUS about antisemitism may help them better understand what it looks like, but it won’t explain to them why it keeps popping up alongside Palestine activism, with its Israel Apartheid Week and “pinkwashing” and posters of dead babies. The NUS, and students in general, need to spend time mulling that over. They need someone to ask them how they come to hold a position that says, essentially, “Jews are lovely people, but you can’t let them run their own affairs or they turn into Nazis and Afrikaners.” They need to think seriously about the implications of data that say 90% of British Jews support Israel’s existence, because it means either 90% of British Jews are for apartheid and baby-killing (even though they vote consistently for left-wing positions) or anti-Zionists have embraced a lie. They need to stop and consider why it’s so important to deny Jews the IHRA definition of antisemitism, which demonstrably allows all legitimate criticism of Israel—so important, that more anti-Zionist groups button-holed the investigation than pro-Jewish ones.

They need, in other words, to think about what the anti-Israel side of the struggle has been telling them all these years, and why it is that they’ve signed on so completely and uncritically. What are the chances that that’s going to happen if looking away is an option?

I’m pessimistic because a voluntary mass opening of minds is not consistent with anyone’s experience of human nature. It’s not going to arise by itself from well-meaning seminars about the history and appearance of antisemitism. Separating people from their beloved prejudices is traumatic, and takes a traumatic degree of force—the more so when it pulls the rug out from a self-image of moral superiority. The NUS, like Corbyn’s Labour before it, needs a Rebecca Tuck, or even just a Keir Starmer, to take it by the ear and drag it through the process, but Tuck can’t and, unlike Labour, there’s no one inside the NUS to do the job. The paid staff make the wheels go round but they don’t run the show, and all the pool of leadership is contaminated. So, how likely is change? How much more likely is it that we’ll find ourselves in another couple of years back where we are today? Right now, Rebecca Tuck’s report seems like the best, most thorough effort to date and the NUS’s response sounds genuine and sincere, but I can’t see the mechanism by which real reform is going to happen. This is what ideological capture looks like: Ms. Tuck can show them, point by point, what they’ve done wrong and they can see that they did it, but they’ve carefully rooted out everyone who could help them even identify the intellectual blindness that makes it inevitable, much less chart them a new course. 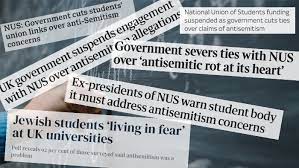 A postscript: Here in the USA, the BBC’s Home page informs me that the 49ers beat the Seahawks and Lisa Marie will be buried at Graceland. On the News page I can read about a model of the Lake District made out of Lego and many other fascinating things—but I can’t read their one tepid article about Tuck unless I already know the report exists & search for it. I’m really curious to know whether it’s any different for those of you in the UK.