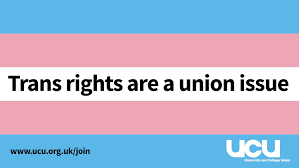 British unions have long lost the plot on anti-zionism, often enthusiastically careening into anti-semitic tropes. The government cut ties with the National Union of Students  in May after repeated complaints from Jewish students. The NUS’ leaders have a rather long history of making anti-semitic comments.

“Jewish students need to have confidence that this is a body that represents them, and we need to be sure that the student bodies that we engage with are speaking fairly for all students,” he said.

It is clear that some unions have also lost their minds over transactivism. The Times ran an article yesterday with very serious allegations against the University and College Union (UCU). A UCU whistleblower provided the Times with minutes of a meeting last September where the UCU’s LGBT committee agreed to email a survey to LGBT members at universities across the country. Part of the aim of the survey was allegedly to identify and report  EDI university staff holding gender critical views.

These minutes stated that the survey would “get information about gender critical equality, diversity and inclusion consultants … employed in HR departments of various institutions”.

It suggested that a question could be included in the survey asking: “Are you aware of your institution employing EDI [equality, diversity and inclusion] consultants in the sector and if so which ones.”

The minutes added: “The last question is to get information about how many HR and senior HR staff/consultants are gender critical and then to inform branches, so that they are aware of any problems which may arise in a particular branch.

“Some of the EDI consultants are transphobes and prominent gender critical activists.”

One academic, who spoke anonymously for fear of repercussions, claimed: “These minutes are compelling evidence that UCU is seeking to discriminate against and harass members who believe in sex.”

The UCU denied these claims but it has also accused the newspaper of a deliberate campaign against it following the Kathleen Stock debacle at Sussex University.

Jo Phoenix, a former criminology professor at the Open university recounts how  prominent UCU members referred to people who hold gender-critical beliefs as being Holocaust deniers while Sheree Benjamin has gone from a dyed-in-the-wool unionist and branch officer for UCU to resigning from the UCU last year.

“I support the rights of trans-identifying people to live in peace, with dignity and respect. But I realised that what some people meant by ‘trans rights’ was an extreme and dogmatic version of gender identity politics.

“I was coming up against an impenetrable wall of: ‘There is no debate, and if you say we should stand up for Ann then you too are transphobic’.”

In 2019 she complained about an email thread on a union activists list which used the acronym ‘Terf’. She was expelled from the mailing list by a circular email with the subject line: “F****** transphobes f*** off!!”

One assumes that rather swivel-eyed authoritarian types are attracted to union leadership and tend to nurture their obsessions via the union but it is still incomprehensible how unions can disappear down the rabbit-hole and act against most of their own members’ interests.

Unite under Len McCluskey tied its colours to Jeremy Corbyn’s antisemitic leadership at Labour. Corbyn is long gone as party leader but the fall out continues. The JC reports on a group of Rabbis who resigned from Unite in 2018. They have joined a new union which promises to really treat antisemitism as any other form of racism.

Update: The Telegraph reports that the EDI officer at the University of Sheffield was pressured into resigning after a concerted campaign of complaints from his colleagues in the union who were upset over him signing a letter of support for Dr Kathleen Stock.

Within a month, the adviser, who asked The Telegraph to protect his identity for fear of reprisal, was told he could no longer work in LGBT+ and race equality at the university as his views “created friction with key stakeholders”.

He was swiftly moved to different work in the human resources team, without any formal investigation, and his appeal and request for an apology through whistleblowing procedures were rejected, documents show.

During grievance meetings, Prof Valentine wrote in her notes: “The complainants stated there was a conflict given that [he] was a member of the HR team and the EDI team who was working with the LGBT+ staff network, and that his views could be threatening to trans members of that group”.

When the adviser asked managers in a grievance meeting whether he could tweet his own viewpoints, he was told: “Just don’t share them, don’t make them public.”

He felt he had no choice but to quit the university in July and has now gone public to warn of an “ideological bubble” of senior leaders “crumbling” to “dictatorial” trade union activists.

He told The Telegraph: “The far Left have hijacked important issues and senior leaders in universities have folded under that pressure and are actively removing anyone who dares to make their legal views known.”

The university told him in letters that his treatment was “appropriate in the circumstances” as “a formal process would not have been a supportive one for you”, and it said it had not discriminated against his beliefs.