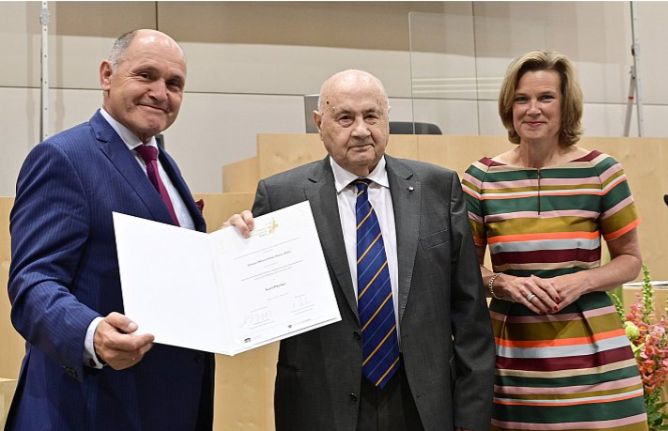 Mazal Tov to Karl Pfeifer, a longtime regular contributor to Harry’s Place, for receiving one of four Simon Wiesenthal Prizes from the National Fund of the Republic of Austria for Victims of National Socialism, established by the Austrian Parliament.

Karl Pfeifer was born in Baden near Vienna in 1928 and fled to Hungary with his parents in 1938. He managed to escape to Palestine and returned to Austria in 1951. He is active as a journalist and was editor of the “Gemeinde”, the official organ of the Jewish Community of Vienna. Until 2005, he worked as a Vienna correspondent for Israeli radio and as a freelance journalist for magazines. He is active in work against antisemitism.

Here is an English translation of his speech:

When my first book Nicht immer ganz bequem (Not Always Comfortable) was presented at the parliamentary club of the Greens in November 1996 and Simon Wiesenthal gave the laudation, no one could have imagined that a prize would be named after him in Austria and that I would have the great honour of receiving it.

When I arrived in Austria 71 years ago, I was received with the explanation that those coming home are those who were in the Wehrmacht or the Waffen-SS. I was only a returnee and had no right to the support of the state. As a result, my first address was at the Asylum of the City of Vienna in Meldemannstraße, in a dormitory with 49 other men. The few Jews who had returned had to realise that the deep-rooted hatred of Jews that had existed long before the National Socialist rule had not disappeared.Let’s put it bluntly, no party, no social force in this country can claim to have always consistently fought antisemitism in all its forms after 1945, and if it was perceived at all, it was primarily among political opponents.

Today we understand that hatred of Jews is a problem of society as a whole. The fact that I am standing here today and receiving this award shows that a lot has changed since my return. I notice this change as a contemporary witness in schools. The Republic is making an effort to teach the values of democracy to the pupils here. The children listen with interest when I speak and I often notice that they are affected and empathetic.

Aloys Blumauer wrote 240 years ago in the Observations on Austria’s Enlightenment: “Unlearning things that are once firmly hammered into one’s head takes much more time than learning.”

Superstition and prejudice, which the Austrian Enlightenment thinkers confronted at the time, are still present, as is hatred of Jews, which comes from the middle of society. With patience and understanding, these can be pushed back. We want to continue to work on this, because as it is already written in the Proverbs of the Fathers, “It is not for you to complete the work, but neither are you authorised to do nothing.”