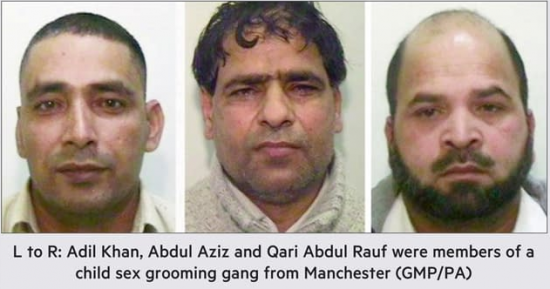 Wasiq writes: “If social harmony is disrupted when the law is broken, then so be it. It is the job of the police and the local authority to deal with it, not to engineer a situation that suits them and the resources they have or lack to deal with it.”

On Tuesday 14th January 2020 at 10:00am a report was released by Andy Burnham, Mayor of Greater Manchester, on the CSE scandal that had not only gripped the City but also the nation at large. The report highlights a possible 57 mostly white female child victims to a potential 97 perpetrators, who are mainly men from a Pakistani and Muslim background.

The nature of the crimes against these children were that they were groomed and sexually abused by gangs of men. This involved plying them with alcohol and drugs, buying them food as well as physically and mentally threatening them. It would be correct to say that what the victims had to endure, was beyond anything a child should have to bear and it was an unfair experience of which it is unlikely that they will completely heal from for the rest of their lives.

The most serious raw outcome from this was the death of Victoria Agoglia. At the time, she was 15 and was in the care of the local authority of Greater Manchester. However, despite being the responsibility of the local authority, she was still subjected to sexual abuse, rape, violence and being injected by heroin regularly. This happened in plain sight. Despite her disclosures to social workers and other agencies, it appears not enough was done to protect her, she died of a drug overdose.

Significant debates have emerged regarding the ethnicity and religion of these perpetrators. What one cannot escape from, is what the report says on this matter. One detective disclosed “we were told to try and get other ethnicities…” Whilst this may appear to be shocking, it should not be so. For example, 6 years prior to this, the Jay Report on grooming gangs in Rotherham found:

“Some councillors seemed to think it was a one-off problem, which they hoped would go away. Several staff described their nervousness about identifying the ethnic origins of perpetrators for fear of being thought racist; others remembered clear direction from their managers not to do so.”

What this seems to suggest is that some were fearful that if doing their job meant unintentionally stoking racial tensions, then sacrificing a few white girls for a greater social harmony was more important. Not only does this tell us that the children appear to not have been valued, but that it seems community cohesion was prioritised over them.

I have no sympathy for the police, the local authorities or anyone else that was in power and stood by this apparent message. If social harmony is disrupted when the law is broken, then so be it. It is the job of the police and the local authority to deal with it, not to engineer a situation that suits them and the resources they have or lack to deal with it. If one of their intentions was to minimise disruption to their status quo, then they have spectacularly failed. Not only has this issue become a national agenda item, but Greater Manchester Police and the Local Authority are now very much under the spotlight.

The whole situation of white underage girls being pimped out, groomed and abused by what seems to be a disproportionate number of gangs of Pakistani Muslim men is what we are faced with, then there can be no attempts at either denying that it exists or bringing up other cases with perpetrators of a different religion or race. Now is not the time for whataboutery, now is the time to admit that there is a problem and deal with it. But it is unfortunate that it has taken so long for us to come to our senses in identifying what it was. But we are where we are and we need to move forward and not make the same mistakes as what appears apparent in the report.

It is worth exploring how we have become so sensitive as a society. If there is one thing we Brits are proud of, it is freedom of speech and freedom of belief. For years we have been able to say and think what we like, without fear of being accused of racism, sexism or anything else that doesn’t contravene the law. But it appears, it is not the case, at least with the grooming gang scandal that has gripped the nation.

It is simply a statement of fact, that in this model of abuse, whereby gangs of men prey on vulnerable girls, perpetrators are disproportionately Pakistani and Muslim. This is further backed by a report from Quilliam which concluded in 2017 that 84% of perpetrators were South Asian men. It is a statement of fact that child victims are disproportionately white females. Why is it that we can say with such confidence who the victims are, but not the perpetrators?

Brendan O’Neil editor of Spiked is seen as a divisive figure in the world of politics, but in his column on this very issue raises an important point:

“Think about this: we live in a time in which a middle-class woman’s complaint about overhearing a sexist joke or having a hand briefly placed on her knee becomes a huge scandal and can even dominate news coverage, and yet a vulnerable working-class girl can experience horrendous genuine abuse and a coroner, influenced by the view of social services, will refer to it as ‘sexual favours’.”

What Brendan O’Neil highlights is not that a sexist joke isn’t important, or that unsolicited hand on a knee doesn’t fall into the realms of sexual assault; instead what he highlights is how the Woke will assert that both those instances are equal to that of the child victims of grooming.

These child victims were not only let down by authorities  charged with looking after them but also a political environment that made it difficult to deal with. If we genuinely want to ensure this doesn’t happen again, we need to be more intelligent with tackling real cases of racism, sexism and other forms of bigotry.

We cannot go on like this, whereby, for example, white privilege means you have an unfair advantage over ethnic minorities. Because in this case and other cases of grooming, prima facie, brown men had the privilege and they had the advantage of not only their child victims, but also the local authorities and the Woke communities.