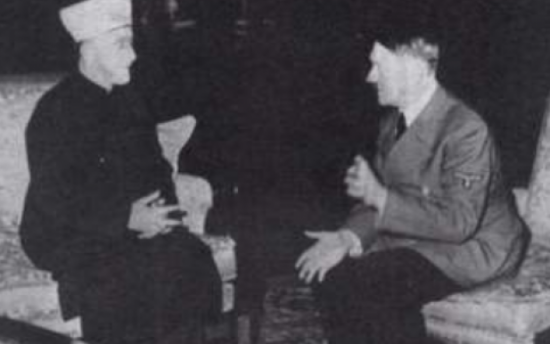 On 23 January, some 55 heads of state, prime ministers and members of royal families will visit Yad Vashem to commemorate the 75th anniversary of the liberation of the Auschwitz death camp.

After solemn speeches emphasising that ‘never again’ should such a catastrophic event happen,  the event will conclude with a memorial ceremony. Holocaust survivors will light a memorial torch and delegation heads will lay wreaths.

It is all well and good to learn the lessons of Nazi antisemitism, which still inspires fascist and ultra-right extremists today in the West – what the commentator Ben Cohen calls bierkeller antisemitism.

There is a danger that world leaders will come away with confirmation of the idea that antisemitism was a purely European phenomenon.  Israel  is ‘Europe’s penance’ for killing six million European Jews.

The world’s leaders will visit Ramallah with little inkling of the depth of pro-Nazi feeling among Arabs during WWII.

The Palestinian leadership will take care not to mention  that one of the foremost Arab leaders, the wartime Mufti of Jerusalem, Haj Amin Al-Husseini,  was complicit with the Nazis. After  the Palestinian Mufti incited the 1941 Farhud massacre of Iraq’s Jews, he spent the rest of the war in Berlin as Hitler’s guest. While pumping out vicious anti-Jewish radio propaganda to the Arab world,  he sought Hitler’s permission to manage the extermination of the Jews  across the Middle East and North Africa – not just in Palestine -should the Nazis  win the war.

When the war ended, the Allies did not put Haj Amin al-Husseini on trial at Nuremberg. As a result, the Arab world was never ‘de-Nazified’. Its legacy of antisemitic, Nazi-inspired Islamofascism/  Islamist terrorism – represented by the Muslim Brotherhood,  Islamic State, Al Qaeda and Hamas –  also fuels jihadist antisemitism in the West today.

Will anyone at Yad Vashem make the point that 850,000 Jews were forced to flee Arab lands because Arab League states implemented anti-Jewish laws eerily reminiscent of Nuremberg laws against their Jewish citizens, stripping them of their rights and dispossessing them of their property?

On their visit to Ramallah,  some guileless leaders will endorse the Palestinian ‘right of return’ without realising that this simply replaces genocide with politicide. In other words, Palestinian genocidal intentions have been concealed in the language of human rights. The BDS movement lends continuity to this longstanding campaign.

One head of state will not be present at Yad Vashem on 23 January. Ayatollah Khameini of Iran has remained faithful to such genocidal aspirations. He denies the Holocaust and threatens another against the Jews.

At least we know where we stand with the Iranian regime.

This is a crosspost from Lyn Julius