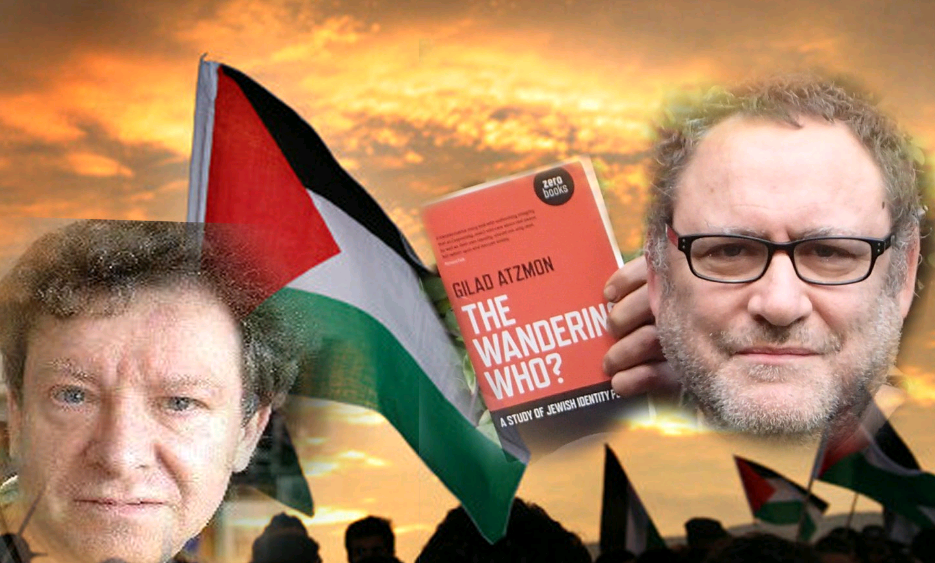 Despite constantly attacking Gilad Atzmon and supposedly seeing him as an antisemite Tony Greenstein has been publicising a book defending him and even contributed a passage to the publication.

Both Greenstein and Atzmon are regularly called antisemitic for the way they discuss Jews and Jewish issues.

Greenstein calls Atzmon antisemitic though rejects the term when applied to himself.

The Antisemitism Wars has been published by Karl Sabbagh and consists mainly of open source documents available online. 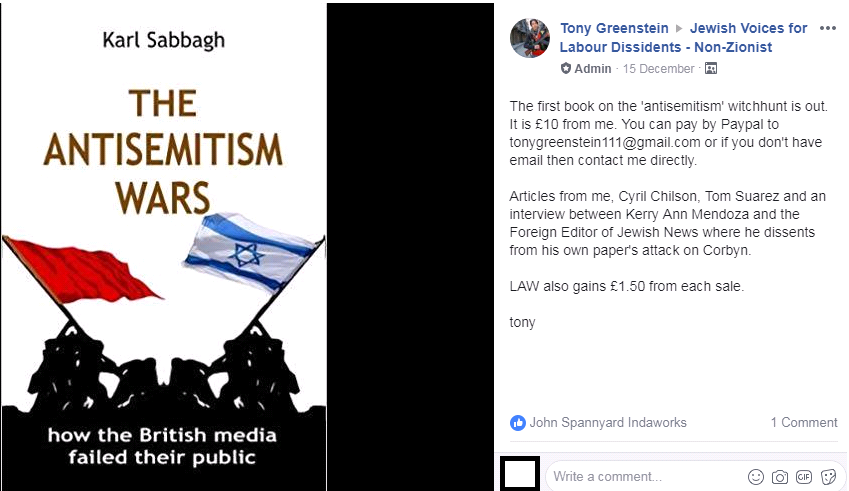 The only parts of the book that appear to be original are four essays, one of which was contributed by Greenstein. The veteran activist wrote that upon Corbyn’s election as leader of the Labour Party

“alarm bells must have been ringing all the way from CIA HQ in Langley Virginia to the Israel military’s HQ in Kirya, Tel Aviv” adding “Democracy has its limits and those limits had been reached with Corbyn’s election”

The theme of an international conspiracy to have Greenstein removed from the Labour Party continues through about 20 pages:

“The sheer volume of articles and propaganda relating to Labour’s ‘antisemitism’ strongly suggest that there is a certain level of co-ordination behind what is happening. From 1965 to 1975 the CIA ran its own news service in this and other countries” and then “We can be sure that the intelligence agencies have been up to their ears in supplying journalists with fake copy.”

Greenstein mounts a defence of Hamas and Hezbollah saying:

“What he could and should have said was what he [Corbyn] has previously said, namely that Hamas and Hezbollah were not ‘terrorist’ organisations but groups that represented their own people. He could also have compared these groups to the ANC who had also been called terrorists by Thatcher and Reagan.”

He also seeks to defend Livingstone’s comments about Zionists and Hitler, writing that the Haavara agreement:

Resulted in 60% of capital investment in the Zionist economy between 1933 and 1939 coming from Nazi Germany. It also destroyed the International Jewish boycott of Nazi Germany which had threatened the very existence of the Nazi regime. The Zionist movement had one concern. Saving the wealth of Germany’s Jews. The agreement itself saved hardly any Jews.”

This last point is particularly mendacious. Rainer Schulze, Professor of Modern European History and General Editor “The Holocaust in History and Memory”, University of Essex wrote that:

“However critical one might be of Zionist policies in action, Zionism was a movement based on the right of self-determination. It originated as a national liberation movement, both mirroring the aims and aspirations of other national movements in 19th-century Europe and responding to the surge of anti-semitism in the newly established European nation-states.”

Ironically while defending Atzmon’s right to play in Islington Greenstein writes on his own blog that he’s more critical of Atzmon than anyone:

“I have written dozens of articles analysing why Atzmon’s writings are both anti-Semitic and unhelpful to the struggle for Palestinian liberation. I produced A Guide to the Sayings of Gilad Atzmon, the anti-Semitic jazzman and in a review of his book The Wandering Who I described it as  Worthlessand Devoid of All Originality. Other articles included Gilad Atzmon Comes Out – Now an open anti-Semite .  I penned a number of articles in Weekly Worker such as Time to say goodbye.”

Yet he’s written an original work for Karl Sabbagh (Atzmon’s publisher) that includes a long apologia for Atzmon by Eve Mykytyn, someone published on Atzmon’s own website.

In fact it’s difficult to tell the difference between Mykytyn’s arguments and Greenstein’s own. Perhaps Greenstein’s stance is softening on Atzmon, he did after all just write a piece arguing that preventing Atzmon from performing in Islington was a racist act (whereas preventing Israel musicians who aren’t antisemitic from playing apparently isn’t).